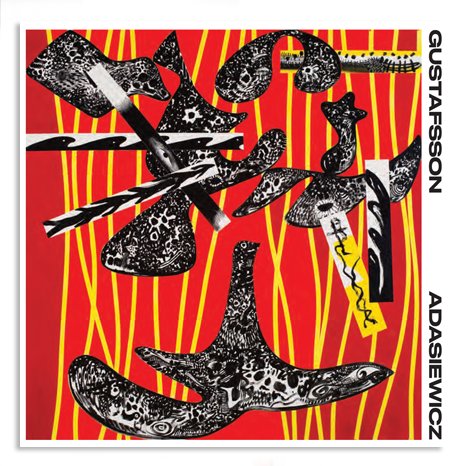 Discussing this impending studio date, the indefatigable saxophonist Mats Gustafsson and intrepid vibraphonist Jason Adasiewicz decided to compose new pieces for one another. The resulting tracks – which also include a hallucinogenic arrangement of “Timeless,” dedicated to its composer, the recently deceased guitarist John Abercrombie – show a markedly different side of both musicians. Quiet, at times tender, this meeting-of-like-minds evoked a new kind of tension, not one birthed out of screams and wallops, but instead one marshaling the power of restraint. Gustafsson’s work with groups like the Thing and Fire! Orchestra have made him one of the most renowned figures in contemporary energy music, and Adasiewicz’s joyous noise in his own bands and with Peter Brötzmann, Rob Mazurek, and many others have likewise earned him top status in the pantheon of today’s free musicians. On Timeless, they explore low dynamics, static soundscape, and melodic lyricism, infused with passion and intellect. One track features the wooden-keyed African balafon, coaxing a buoyant response on alto from Gustafsson, while their mutual boyhood love of highly select fusion records provided an unforeseen jumping off point for the whole record. On the cover, a painting by Charline von Heyl; across the interior, a photo portrait of the musicians.

Mats Gustafsson – alto, tenor and baritone saxophones
Jason Adasiewicz – vibraphone and balafon
Thanks to all at CvsD
Thanks to Ken Vandermark for the excellent saxophones
Thanks to John Corbett for an unusual alto saxophone
Thanks to Clark Coolidge for the inspiration for titles
Thanks John Abercrombie for all the music!