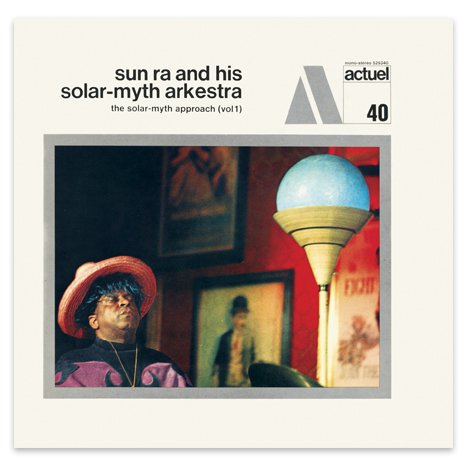 Sun Ra and his Solar-Myth Arkestra

Two certifiable Sun Ra classics refreshed and renewed and rolled into the perfect two CD package. First released on the French label BYG/Actuel in 1971, the companion volumes of The Solar-Myth Approach were essential in introducing Ra's monumental program to an international audience. As with many Arkestra records, the information on these gatefold packages was dubious at best. Here they appear with corrected lineups and dates, showing that the music actually stretches back to the early 1960s, but was assembled into a beautiful chronological mosaic that serves as a gripping survey of early-post-Chicago Ra. It's an ideal way to start listening to his music, and for his fans absolutely essential items in the gargantuan discography. These LPs have been reissued a number of times since BYG/Actuel folded, and with each new batch the fidelity has diminished, so that they've been a pale shadow of the original recordings. For the first time, the sound has been lovingly restored to a previously unimagined level of omniversal fidelity, and one track ("Scene 1 Take 1") that was mastered at the wrong speed on the original – perhaps a Ra idea, perhaps just a disconnect between the producers and the composer – has been included as a bonus track remastered at the corrected speed. Packaged in the glorious original LP designs, with a definitive essay by Irwin Chusid, this is The Solar-Myth Approach as it was meant to be experienced.

All titles by Sun Ra © Enterplanetary Koncepts (BMI). Original sessions produced by Sun Ra. Executive Reissue Production for Corbett vs. Dempsey: John Corbett. Audio restoration and research by Irwin Chusid. Possible recording locations and years: Sun Studios, New York, 1965–1969: A1, A3, A4, A7, B2, B4, B5. Choreographer’s Workshop, New York, 1962–1965: A2, A6, B1, B6. Gershon Kingsley Studio, New York, 1969: A5, B3, B8. Fondation Maeght, France, 1970: B7. Original cover photos by Jacques Bisceglia. Thanks to Michael D. Anderson, Christopher Trent, Robert L. Campbell, Brian Kehew. Licensed thru Sun Ra LLC. Special thanks to Thomas Jenkins Jr.