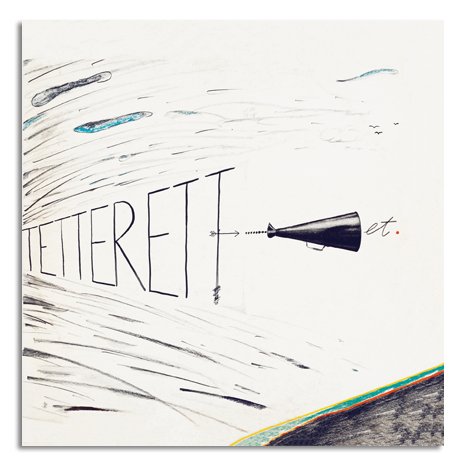 Recorded in 1977, the Instant Composers Pool’s Tetterettet is the first classic of the band’s larger incarnations. Assembled out of elements recorded live in Uithoorn, Utrecht, and the band’s home base of Amsterdam, with Misha Mengelberg using a cut-and-paste collage method akin to Teo Macero’s work with Miles Davis, the record features an all star lineup that added three leading lights of free music: bassist Alan Silva and saxophonists John Tchicai and Peter Brötzmann. In this period, Brötzmann made the long train trip from Wuppertal, Germany, to A’dam on a weekly basis to rehearse with ICP, bassist Silva coming in from Paris. Well known for his work in pioneer creative music ensembles such as the New York Art Quartet and the New York Contemporary Five and on John Coltrane’s Ascention, Tchicai was the Paul Desmond of free jazz, with a softer, more subtle phraseology than many of his peers. These international figures joined pianist Mengelberg and drummer Han Bennink – whose ICP co-founder Willem Breuker had broken off to form what would be come his long-time working band, the Kollektief – and their outrageous, hyper-inventive big band. Michel Waiswicz, who invented the crackle box, a user-friendly, portable electronic instrument, is a defining presence on Mengelberg’s multipart “Tetterettet,” and along with the heavyweight outta towners the band includes composer, oboist, and saxophonist Gilius Van Bergeyk, whose sequence of compositions nestle perfectly into Misha’s, Han’s gifted brother Peter Bennink on saxes, trombonist Bert Koppelaar, and cellist Tristan Honsinger, who has continued to work with the ensemble even after Misha’s death in 2017. One of the landmark records of Mengelberg tunes, with classics like “Rumboon” and “Alexander’s Marschbefehel,” Tetterettet presents a program full of musical surprises, intelligence, and ICP’s own brand of uproarious humor. A shaggy masterpiece, available here for the first time as a stand-alone CD, remastered from the original tapes, with Han Bennink’s original cover design and a contemporaneous photo from the archives of Gérard Rouy.