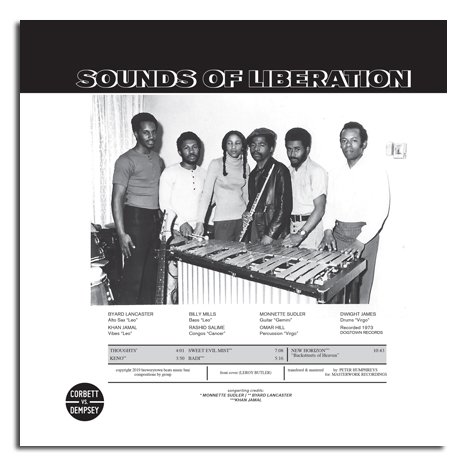 Hailing from the Germantown section of Philadelphia, well known as the site of the Sun Ra Arkestra communal homestead, Sounds of Liberation were at the forefront of seventies black liberation music. After a series of gigs in elementary schools, prisons, and community centers, in 1973 the band travelled along with their manager George Gilmore (father of Linc Gilmore of Breakwater fame) to NYC for a recording session at Columbia University. This five-song session has never been heard until now. Had it ever been issued, it would have followed on the band’s debut, New Horizons, released in an edition of 500 copies on Dogtown Records, now a highly prized item in creative music collector circles. Sounds Of Liberation formed in early 1970, initially lead by vibraphonist Warren Robert Cheeseboro, aka Khan Jamal, but it wasn't until the eventual arrival of Byard Lancaster that the band’s prospects started to take off. Lancaster was a master at making a deal (with or without the band’s approval). This deal-making lead to more gigs and more recognition, especially from local newspapers. Sounds Of Liberation was more of a community than a band at times and because of that spirit there was a strong desire by the entire group to work with schoolchildren as well as inmates. They did just that, and continued to do so throughout the early to mid-seventies. Released briefly last year as a special edition of 100 copies by Brewerytown Beats, who have forged positive working relationships with the living members of the band and the estates of those passed, the music on Sounds of Liberation has never been heard before, which is especially strange given how wonderful and accessible it is. Shoulder-deep in groove juice, it’s a record with heavy ostinati and beautiful backbeats, including the mellowing influence of Jamal’s vibes and the incisive guitar of Monette Sudler, the final track featuring an unidentified vocal group singing a stone-cold soul hit, also featuring some searing saxophone courtesy of Mr. Lancaster. A treasure for fans of so-called spiritual jazz and free funk, Sounds of Liberation is a snapshot of its era and equally an inspiration in ours. The package comes with never seen photos of the band and a cover design by artist LeRoy Butler, who worked with the SOL in the era, at the same time he was designing records for Sun Ra. With music lovingly coaxed from long-unplayed original tapes, Sounds of Liberation is a new line item in the soul improvisation pantheon.