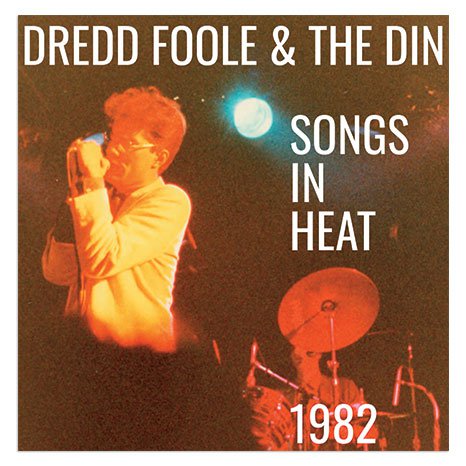 While Dredd Foole would stamp his legend as a foundational figure in the New Weird America free folk underground of the 1990s and 2000s, that is just the second half of the story.

Forty years ago, in February 1982, Dredd entered the studio with Mission of Burma, stepping off a remarkable decade of post-punk activity that drew comparisons to The Stooges, Tim Buckley, and various outsider musicians. They would never tour and lacked ambition, so their powers were largely witnessed by a cloistered Boston scene. After an exhaustive approach in which hundreds of live, studio, home, and private performances have been located and reviewed over several years, Corbett Vs. Dempsey presents the first release in an ongoing series that will reconstruct the legacy known and the legacy damned of the most overlooked and under-documented American free rock unit, Dredd Foole and the Din.

During an era of peak corporate control on popular music, when guitars were in the closet, improvisation was in retreat, and the flames of fire music were dimming, Dredd Foole and the Din emerged as part of a new underground kicking against the pricks, holding the line with the firmly clenched spirit of The Stooges, The Velvet Underground, and the newfound freedoms of the DIY post-punk landscape. Dredd’s approach was radical even by the underground standards of the day: only the chords and some lyrics were predetermined, yet the songs were recorded in one take, without rehearsal. He sought to engineer maniacal and spiritually-frenzied bursts of raw aliveness. That this was achieved with such rock action is testament to the power of those involved.

Until now, the only documentation of Dredd Foole and Mission of Burma’s nearly two years of lowkey collaborative activity –– the celebrated band’s sole collaboration during their initial incarnation –– was a two-song 7” single. Radically remixed / fully mixed from the original master tapes, remastered, and with the full cooperation of Dredd Foole and Mission of Burma, this first archival effort surfaces the entirety of that blistering studio session, growing it to near-album length and presenting a full picture of the Din’s sound. The studio effort is balanced by a lofi selection of the project’s astounding live debut from later that year, captured on cassette.

Produced and designed by Kris Price.