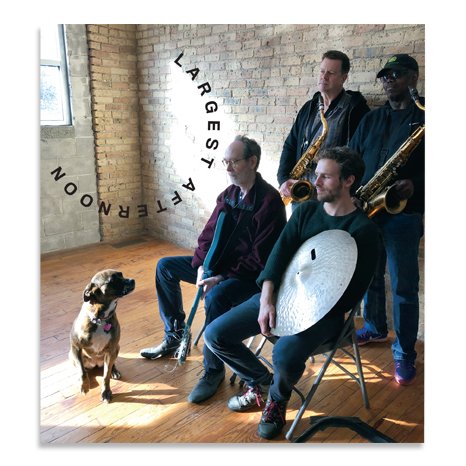 One day in the studio, something ridiculously great happened. It was deep Chicago winter, cold as shit. Four musicians assembled for a round-robin set of improvisations – duets, trios, a few quartets. Approached casually, the late morning bloomed into Largest Afternoon, 15 crackling encounters between guitarist Arto Lindsay, saxophonists Joe McPhee and Ken Vandermark, and drummer Phil Sudderberg. No expectations – open minds and creative intent. Lindsay, a brilliant singer and songwriter and one of the key architects of No Wave via his band DNA, has proven himself once again to be one of the world’s top texturalists, and he is an equally sensitive and challenging group improvisor. Vandermark and McPhee brought their long friendship and musical partnership to the studio, and both engaged with Lindsay in different ways, bringing blue flame and melody. The session’s final wildcard, Sudderberg, a versatile drummer who collaborates with Vandermark on the band Marker, brought a lovely sense of buoyancy and ear for contrast in colors, as well as a raucous rock pulse. With parts this stellar, imagine when Largest Afternoon > than the sum. Nobody knew this would happen.