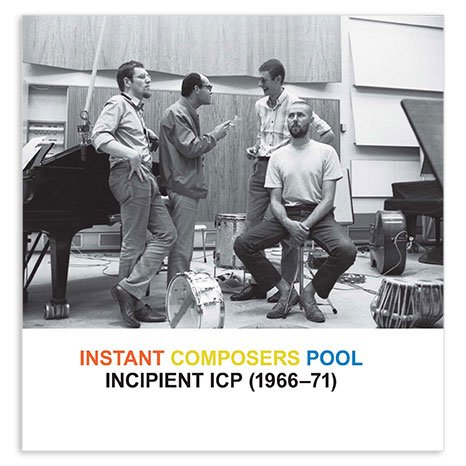 The untold early history of Amsterdam's seminal collective. Founded in 1967 by three of European free music's leading lights – pianist Misha Mengelberg, drummer Han Bennink, and saxophonist and clarinetist Willem Breuker – the Instant Composers Pool (ICP) was simply one of the most important vehicles for experimentation and improvisation in the history of creative music. Culling ideas and materials from jazz, modern and contemporary classical music, Fluxus, traditional music from the Balkans and elsewhere, as well as avant-garde theater, ICP was ahead of the pack in numerous ways, presenting a kind of irony-tinged, amalgamated version of free and structured improvisation – or instant composition – that would be a hallmark of subsequent movements in New York's downtown scene and elsewhere in Europe in decades to follow. Based on twenty years of deep research, Incipient ICP (1966-71) picks up the story just before the group's foundation, with previously unreleased recordings of groups led by Mengelberg in 1966, among them a performance of their notorious piece "Viet Cong," with Breuker joining the Mengelberg Quartet. The only tracks in this 2-disc set that have been commercially released – and only on the enormous 53-disc box set – come from studio sessions in 1967, featuring a mid-sized band with German trumpeter Manfred Schoof as special guest. These beautifully recorded tracks suggest the dichotomy between projects led by Mengelberg (two pieces) and those led by Breuker (four pieces), a schism that would grow until Breuker left the band in the mid 1970s to found his own group, the Willem Breuker Kollektief. Three more tracks led by Mengelberg in 1969 feature American keyboardist and composer Frederic Rzewski, as well as an incredible spotlight on Frans Brüggen's unusual amplified double-bass recorder. The final suite comes from a 1971 date led by Breuker, sans Mengelberg and Bennink. Moving more toward his Kolletief concept, Breuker leads a drumless quintet through his own cabaret-inflected pieces – featuring Lodewijk de Boer's hardcore electric viola and brother Peter Bennink's alto and soprano saxophone – as well as Albert Ayler's "Angels." The deluxe package sports contemporaneous photos of the players by Pieter Boersma.