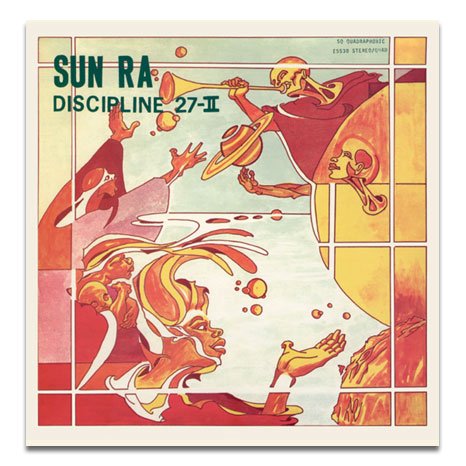 Arguably the last great original era Saturn LP to be reissued on CD, Discipline 27-II has long deserved to be more familiar to Sun Ra fans and layfolk alike. Recorded during the same sessions in 1972 at Chicago’s Streeterville Studios that produced Ra’s most popular and best-known record, Space is the Place, it’s got much the same vibe, from the 24-minute four-part suite of the title track – an important conducted piece that Ra performed frequently in these years – to the opening cut, “Pan Afro,” with John Gilmore’s sensational tenorwork. With a percussion-rich 18-piece Arkestra, the music can be thick, voluble, and dense or it can winnow down to a small group, as on the delightful track “Neptune,” a vehicle for June Tyson’s singing and the site of the indelible Sun Ra space chant: “Have you heard the latest news from Neptune, Neptune, Neptune?” This is the first time Discipline 27-II has been reissued on CD. It has been remastered from the original tapes, includes a never published period photo of Ra by Charles Shabacon, and ends with an explosive bonus track from the same session, showing quite a different side of the same ensemble.

Released under license from Sun Ra, LLC. Thanks to Strut Records.