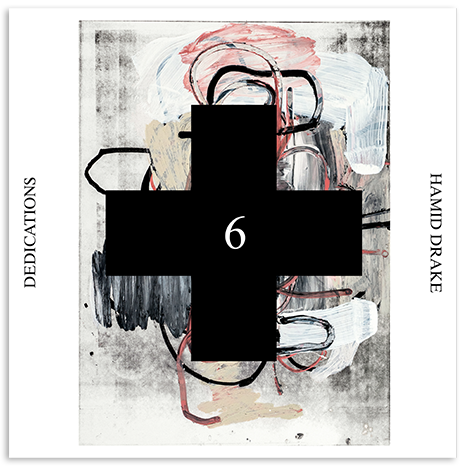 One of the towering creative musicians of our time, a master drummer and multiple percussionist, Hamid Drake has anchored inumerable bands. As a hard working player, constantly touring the globe, he's collaborated with most of the major figures in improvised music and contemporary jazz, from David Murray and Peter Brötzmann to Pharoah Sanders and Don Cherry. Along the way, Drake has never had an opportunity to stop and make a solo record. Indeed, he's only performed solo on a few occasions. John Corbett began petitioning Drake to record an unaccompanied session twenty years ago. At last, after the pandemic had (just slightly) slowed down Drake's incessant travel itinerary, a plan was hatched and he entered Experimental Sound Studio during the cold, hard month of December, 2020. With Corbett, Jim Dempsey, and engineer Alex Inglizian as his audience, Drake worked through a vaguely plotted-out blueprint, however after a few months had passed, the drummer was unsatisfied with the result. He returned to the studio in July, 2021, with no pre-planned notion, and this time the Hamid Drake magic was everywhere – perched on his drum-throne, working exclusively at the kit, sometimes plying metallic percussion atop the snare, Drake recorded nine tracks, a cornucopia of rhythms and textures that touch on his love of reggae and funk but retain the openness and buoyancy that have made him such a go-to figure among his peers. In the CD's liner notes, he says: "A dedication in spirit to all those who have influenced, helped, opened, nurtured, shown love for, and cared for me along the way." These include Brötzmann's band Die Like a Dog, longterm percussion pal Adam Rudolph and mentor Fred Anderson, fellow drummers Paul Lovens and Milford Graves, Don and Moki Cherry, Big Black, and others. The record, precisely and soulfully recorded by Inglizian, has the beauty and warmth that always radiate from Drake's sticks, from his person and spirit – deep humanity in the form of an unstoppable engine room. Cover art by Christopher Wool.