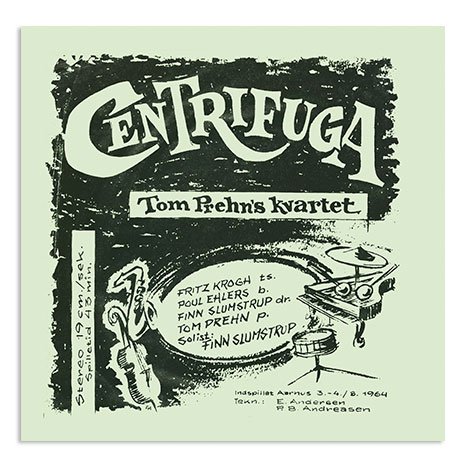 Danish pianist Tom Prehn was one of the first Europeans to deeply explore free music. With his quartet featuring Fritz Krogh on tenor saxophone, Poul Ehlers on bass, and Finn Slumstrup on drums, Prehn recorded Axiom in October, 1963, for Sonet, though it went unreleased until 2015 because the band felt that their music had moved beyond it already. To hear the music they were talking about, one could only turn to two privately-made reel-to-reel tapes, Centrifuga and Sohlverv, recorded in August, 1964, and January, 1965, respectively. Both sessions took place under casual circumstances at Prehn’s summer cottage outside Aarhus, but the music was dead serious – some of the most adventurous improvising yet made by a group on the continent. These tapes have been the stuff of legend. Only a couple copies of them exist, and they’re spoken of in hushed tones by folks in the know, most of whom have never heard what they sound like. The earlier recording, which consists of a single magnificent 44-minute track, is one of the group’s free jazz pinnacles, with Slumstrup featured as a soloist, playing in top form, with the band building structures around his propulsive and sensitive kit-work. On Sohlverv, which translates as “solstice,” the band enters completely unknown terrain, working through a series of four sections with solos featured by each bandmember. Here Krogh reveals his incredible force as an idea generator. As Mats Gustafsson says in his liner notes: “Close-miked percussive sax-pad treatments that swing like mad and give the music a VERY radical profile and color. I have NEVER heard anything like it.” This reissue is the product of a long process, working with Prehn and with the generous and patient Center for Swedish Folk Music and Jazz Research, who CvsD thanks profusely. Mastered directly from the original reels, with notes by Gustafsson and facsimile reproductions of both tape covers. Never reissued in any form until now. Seriously, as the old adage goes, this is music that needs to be heard to be believed.

Recordings and original cover images courtesy of Svenskt Visarkiv, the Center for Swedish Folk Music and Jazz Research. Many thanks to Roger Bergener, without whom this release would not have been possible. Thanks also to Mats Gustafsson, for introducing us to Tom Prehn two decades ago, and to Tom Prehn, for his infinite patience.