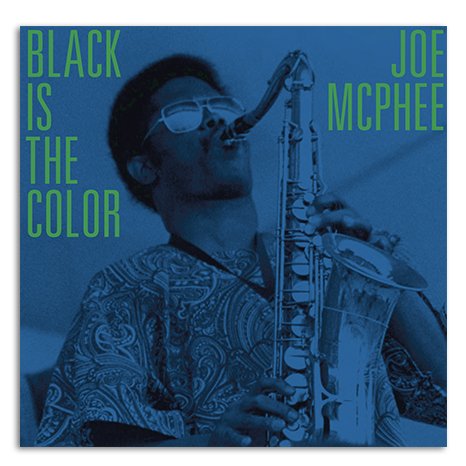 Black Is The Color: Live in Poughkeepsie and New Windsor, 1969-70

Never-before-issued music from three very different settings in upstate New York, all recorded in the period running up to Poughkeepsie multi-instrumentalist Joe McPhee's Nation Time. From a year before that landmark LP, in the same hall at Vassar College, McPhee led a band with soulful vibraphonist Ernie Bostic and voluble rhythm section of Tyrone Crabb and Bruce Thompson, both of Nation Time fame, performing a John Coltrane-oriented set that included versions of Mongo Santamaria's "Afro Blue" and Coltrane's "Naima," as well as McPhee-fave "God Bless The Child." Deeply emotional and fiery playing with this unusual instrumentation – rare to find McPhee playing with a harmonically based instrument like vibes. McPhee had organized a larger group also meant to feature Bostic and a French horn for a concert at a monastery in nearby New Windsor, but the band was pared down to a quartet with saxophonist Reggie Marks, playing a powerful combination of originals and the Patty Waters-associated traditional tune "Black Is The Color." (The concert also featured a cameo by David Nelson of the Last Poets, but technical issues in the recording scuttled that and several other tracks.) Finally, three cuts document a more rough-and-tumble gig taped outdoors in the park at Poughkeepsie's Lincoln Centre – the only surviving recordings of this funky, bluesy, lowdown,
explosive configuration, they feature vocals by one Octavius Graham, great drumming by Chico Hawkins, and Tyrone Crabb on electric bass. This two-CD set has been lovingly transferred from the original tapes out of from McPhee's personal archives, and is augmented by newly discovered photographs of the concerts. A spectacular deep dive into the pure magic of Mr.
McPhee.