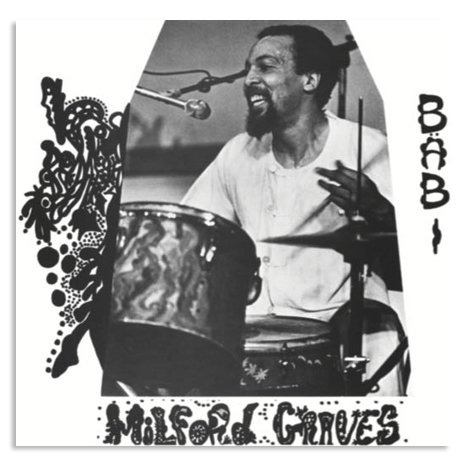 The long-awaited first reissue of one of the most legendary albums in the history of free music. Recorded live in concert in 1976, when Graves' trio with saxophonists Arthur Doyle and Hugh Glover was at the height of its powers, Bäbi is a testament to the absolutely unique approach the drummer had established for himself. He had reconfigured the drum kit, removing the second heads on all the drums and replacing the snare with two toms, which allowed him a much more nuanced sense of indirectness in his multi-directional adventures in time. The track "Ba" remains one of the most astonishing feats of percussion alchemy ever waxed, as funky as ten slap bassists and as free as an exploding grenade. Doyle and Glover are incendiary, too, inspired by Graves to new and shocking heights of achievement, their hoarse cries and whistling split-tones carried to thrilling plateaus on the energy of Graves' hands and feet. The original tapes for the session have been lost, so the reissue was lovingly remastered from virgin vinyl, itself now worth a mint. In 2017, Graves discovered a previously unknown tape in his archives featuring the same trio at its inception, in home recordings made seven years earlier in 1969. Graves pummels a huge gong while Glover plays an instrument that, after sounding like none ever known, turns out to be bass clarinet. Extreme music recorded up close and very hot, it is among the most searing sessions never heard. Until now. Rounding out the 2-CD package are three previously unpublished photos by Gérard Rouy, and the original LP cover design by Graves himself.