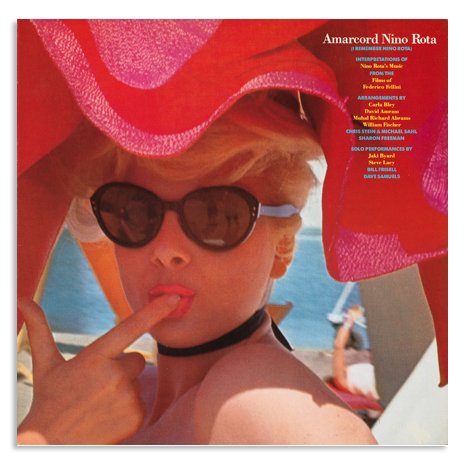 If you think you know how to put a mix-tape together, take a lesson from Hal Willner, the absolute master. In 1981, Willner produced a landmark LP of interpretations of music written by Nino Rota for the films of Federico Fellini. With ten tracks and as many different lineups, this record set the template for a series of brilliant tributes that Willner has made over the ensuing 35 years, covering the songbooks of Monk, Mingus, Weill, and Disney, with a mind-expanding range of performers from Eugene Chadbourne to Chuck D to Diamanda Galas to Peter Frampton. On Amarcord Nino Rota, Willner drew together an equally dazzling spectrum of musicians, compiling them into a perfect program that explores Rota's wonderful, sly, sexy oeuvre from contrasting and complementary perspectives. Pianist Jaki Byard sets the stage with the title track and ends things with "La Strada," and in his first appearance on record, guitarist Bill Frisell contributes a haunting solo acoustic version of "Juliet of the Spirits." Soprano saxophonist Steve Lacy, who lived in Rome early in his international years, offers a take on Rota's "Roma" and vibraphonist Dave Samuels provides interludes and transitions in a couple of spots. On the other end of the size bracket, Muhal Richard Abrams arranges and conducts his band as part of "La Dolce Vita Suite," which ends with a rock group featuring Debby Harry singing a wordless waltz. The Carla Bley Band presents a daunting, suitably hilarious version of "8 1/2," with Gary Windo's ballistic tenor saxophone, a David Amram Quintet with Sharon Freeman on French horn plays "Satyricon," and in a surprise appearance, trumpeter Wynton Marsalis plays alongside his brother Branford, tenor saxophonist George Adams, pianist Kenny Barron, bassist Ron Carter, and drummer Wilbert Fletcher, in William Fischer's arrangement of a medley of Rota chestnuts. Long out of print on LP and only released on CD for a hot minute in the early nineties, Amarcord Nino Rota is a certifiable classic.