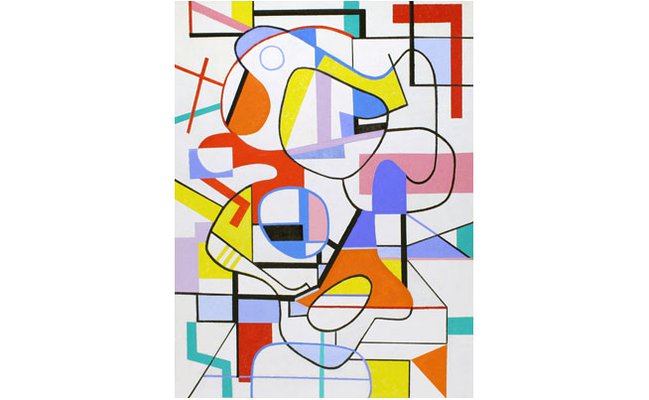 Thomas Kapsalis at the Ukrainian Institute of Modern Art

The Ukrainian Institute of Modern Art is proud to present one of Chicago’s great abstractionists in T.H. Kapsalis: American Artist, Works 1990-2013. The focus of this exhibition is Kapsalis’s works from 1990-2013, and features works in various media, such as paintings, sculptures in metal, wood, and recycled materials. Many of the works were created in the past decade, and have never been publicly exhibited.

Kapsalis’s combinations of colors and shapes are masterfully composed, making his work visually very attractive. But there is more in Kapsalis’s work than geometric abstraction – the titles of the works will open the door to another dimension of his works. They reveal something about the artist and his observations of everyday life, sometime intellectual, sometime with humor, but always with perspective of an American Artist.

A prisoner of war in Germany, captured during the Battle of the Bulge in 1944, Kapsalis returned to the United States, and continued his pursuit of art-making. He has been an important artist and educator since the late ’40s, when he graduated from the School of the Art Institute. He has taught at the School of the Art Institute since 1954. Kapsalis’s work has been exhibited in numerous group and solo shows, and he received many prestigious prizes and awards.

The Ukrainian Institute of Modern Art is located at 2320 West Chicago Avenue, and is open Wednesday through Sunday, 12pm to 4pm. An opening reception will be held Friday, June 7, from 6pm to 9pm.

Installation views, and gallery talk (below)