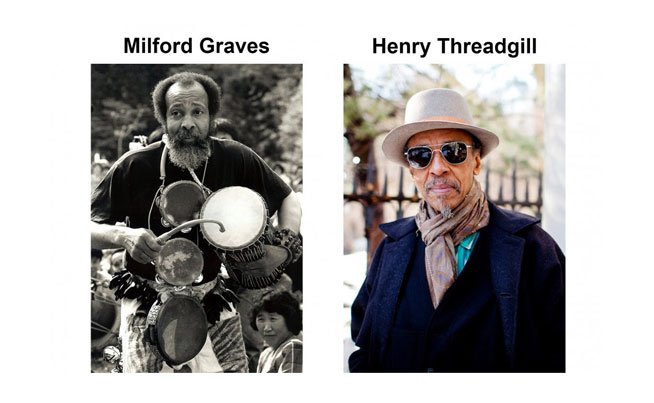 CHICAGO – In its fourth manifestation, the 2021 Instant Award goes to two landmark figures in the development of improvised music.

Milford Graves (b. 1941; d. 2021) was one of the primary transformational agents in jazz of the mid 1960s and he was a constantly evolving musical force his entire life.  Graves’ work with the New York Art Quartet, as a member of groups led by Albert Ayler, Paul Bley, Jimmy Giuffre, Lowell Davidson, Sonny Sharrock, and Giuseppe Logan, in a groundbreaking partnership with pianist Don Pullen, and leading his own explosive ensembles of the 1970s, offered a radical critique of the role of the drum kit in the jazz ensemble.  His layered, multi-directional, polymetrical playing introduced the notion that drums should be considered a front-line instrument like saxophone or trumpet, or more fundamentally that hierarchies and conventional instrumental functions could be entirely reconsidered.  As a soloist, Graves was always an instructor, and each performance was like a master class or a lesson with an elder.  He was infinitely generous in this respect, as he was with his students at Bennington College, where he taught for nearly 40 years, starting in 1973, and in the private sessions he held with people from all walks of life, most often in his legendary basement.  Graves was an inspiration to practitioners in many fields – music, of course, and other art forms, but also martial arts, traditional healing and medical sciences, and herbalism and gardening.  All of these, be they with sticks and skins, with acupuncture needles, or monitoring and adjusting heart sounds with a computer, in one way or another, revolved around his command of energy.  Graves changed the direction of music in the late 20th century, and he did so like someone changing the course of a mighty river – he understood its contours so deeply he could guide it into its new channel, and he watched as several generations of younger musicians flowed along with the new musical resources he’d dredged up in the process.  In recent years, Graves was committed to insights he’d gained researching the nature and function of the human heart.  He was the subject of an acclaimed feature-length documentary Milford Graves Full Mantis (2018) and a solo exhibition Milford Graves: A Mind-Body Deal at the ICA Philadelphia, which presented a survey of his work including a selection of recent drawings and kinetic sculptures.

Henry Threadgill (b. 1944) is one of the towering figures in contemporary creative music.  Born and raised in Chicago, Threadgill was already a member of Muhal Richard Abrams’ Experimental Band as a teenager, and he was a part of the early history of the Association for the Advancement of Creative Musicians (AACM), under whose auspices he made his initial recording, playing alto saxophone on Abrams’ 1969 LP Young at Heart/Wise in Time.  After relocating to New York in 1975, Threadgill initiated a series of pathfinding bands, starting with the trio Air, with bassist Fred Hopkins and drummer Steve McCall, in which he introduced and began to develop his innovative method of composing for improvisors.  Among the features particular to Threadgill’s craft are an attenuation and compression of the notion of the “solo,” a blurring of composed and improvised material, careful attention to the resource of arrangement and the development of methods for its variation, and a kind of modular melodic sensibility in which phrases and fragments are superimposed and sometimes move into or out of register.  Highly revered and sought after as a teacher, even among his peers, Threadgill’s concepts have been central to many younger musicians who have been inspired by the ingenuity of his techniques and the brilliance of his sound, both as a composer and as a saxophonist and flutist.  Over the course of half a century, Threadgill has moved through a series of ensembles with highly distinctive lineups – the two-drum-kits of his Sextett, the electric guitars and tubas of Very Very Circus and Make a Move, and the evolving and flexible instrumentarium of Zooid and most recently Ensemble Double-Up and 14 or 15 Kestra: AGG.  In 2016, Threadgill was awarded a Pulitzer Prize for his music.

A note from Lois Graves:

I am pleased and greatly honored to accept the Instant Award in Improvised Music on behalf of my husband, Milford Graves. When he learned that he was chosen as one of the recipients, he was thrilled and earnestly grateful for the recognition.

Thank you to all who supported his nomination. It is such a sweet feeling to see his brilliance honored. I would also like to extend a special thank you to his community of friends, all of his students, both former and most recent, and of course our family, for the love and enormous amount of support for his art and him as a person. If he were here to accept the award, I know he would have said something super inspiring, fostering perseverance in others to understand their full potential and self-worth.

My husband had an incredible amount of knowledge of art, love and inspiration – which paired well with how often he would give. He was a unique artist and, more importantly, a unique person who has undoubtably left a huge part of himself with everyone he has touched throughout his lifetime. And because of this, he is and will always be forever. In loving memory, Lois Graves and the entire family.

A statement from Henry Threadgill:

Milford was a rare one time only visionary with 150% commitment to his creative brilliance.

A personal note from John Corbett on this year’s Instant Award:

It was with great sadness that we received the news of Milford Graves’ death on February 12, 2021.  Milford was a friend and mentor.  I consider myself deeply honored to have learned so much from him over the last 20 years; he invited me into his home, sometimes with Jim Dempsey, Terri Kapsalis, or Josiah McElheny, where we spent countless hours in conversation, as he did with so many people.  On one such visit, he made recordings of my heart and Terri’s heart, pitch-shifting them into hummable melodies, the ones, he explained, that our bodies were singing to us all day, every day.  I called Milford shortly before he passed to give him the news about the Instant Award.  He kept it cool but I could tell that he was happy.  When I told him that I thought by all rights he should have every award the world had to offer, he laughed and said: “Well, John, you know, man, this is really nice.  It’s OK by me!  I’ll take it, man!”