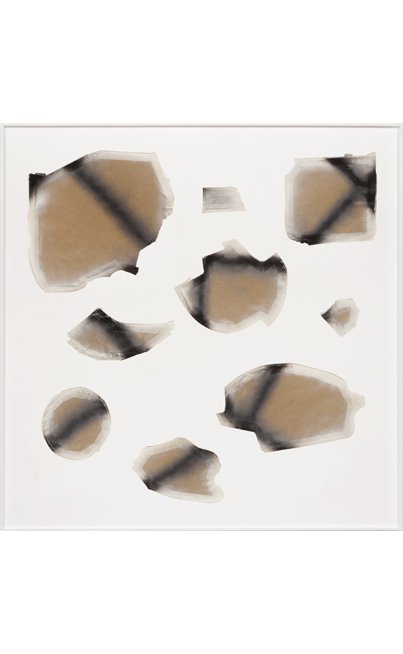 LOS ANGELES – Rebecca Morris’ works in the group exhibition at The Pit are reviewed.

This exhibition, displaying two of Rebecca Morris’s paintings and four of Jessica Jackson Hutchin’s sculptures, feels perfectly tuned. Morris’s signature forms, such as steps reminiscent of a household staircase or front stoop along with blotchy patterning suggesting bacteria or leopard print, are deployed for Untitled (#09-17) (all works 2017), a large canvas glowing in soft salmon pink. The imagery here feels more biomorphic than usual for the artist. Her use of gauzy edges, staining, and pale hues paired with blacks and grays causes the painting to move in and out of focus, a wondrous effect when one is standing directly before it. In keeping with the references to architecture and grids in much of her oeuvre, Untitled (#10-17) resembles a window frame through which nothing can be seen but snow and fog. Together, the works embody Morris’s polar interests in congestion and emptiness.

Of the four Jackson Hutchins works, two represent an entirely new direction the artist embarked upon last year. Writing Not Writing and Presence place her ceramics on steel shelves that grow from armatures framing colored-glass panels. Jackson Hutchins’s technique harkens back to traditional stained glass but produces results no one could mistake for antique. Using a fused-glass method, she creates pieces featuring painterly, abstract pours as well as spattered, animated line work. These new pieces convey a lightness that contrasts with the massive presence of the artist’s well-known found-furniture sculptures, demonstrating her adventurous pursuit of an unexplored language. These two artists are not resting on their laurels.