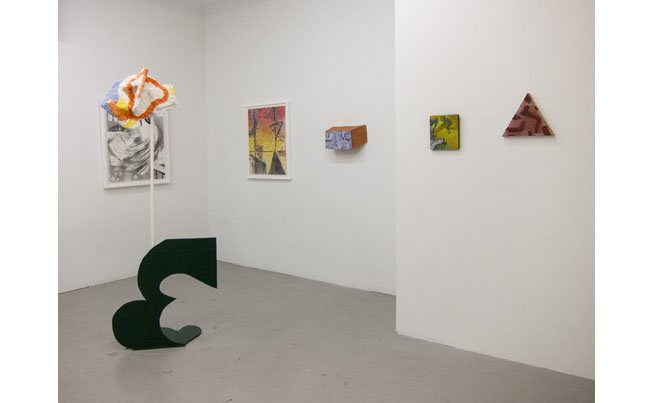 Drunken Monkey is a Kung Fu style that uses (real or faked) intoxication to create confusion and deflection. It relies on an intimate knowledge, and canny disregard for the rules of the game.

The office is a removed place where abstract symbols—charts, maps, and visualizations—are manipulated to impact the outside world. It demands an understanding of complex organization, and of the delicate interactions between meaning-systems and individuals.

These artists, cross-geographical and cross-generational, rely on the tension between structured systems (the office) and the intuitive, unexpected moves usually associated with elevated or altered states.

The extremes of that spectrum can be seen in Dona Nelson’s material wildness and fervent splashes to the tight control on display in Dustin London’s floorplan-like drawings. Margrit Lewczuk’s rhythmic painting elicits the kind of mind-bending patterns that emerge after hours of staring at screens while David Humphrey’s Flower with its smooth curved leaves and chunky petals looks like it was made before and after happy hour. The frustrations and manic energy of production are depicted by Brian Scott Campbell’s drawings, and underlie Julian Kreimer’s space-clashing abstraction.

The office emerges as an architectural and mental touchstone in many of the works: Rachael Gorchov’s blue-glaze painting on ceramic literally depicts the exterior of an office park, and the geometry of office interiors emerges from Rubens Ghenov’s abstraction. Stephanie Washburn’s juxtapositions of found photos and objects evoke the everyday jumbled aesthetics of workplaces, while Lucia Hierro’s felt pieces stitch together different worlds coexisting in New York. Several of the artists mess with the ‘structure’ of history: Devin Troy Strother merges modern art myths with tropes of contemporary blackness, Rebecca Morris brings unexpected intensity to the playful aesthetic commonly associated with Memphis Milano designs, and Christopher Ulivo’s egg-tempera paintings depict history that might have been.

More details and information can be found here.