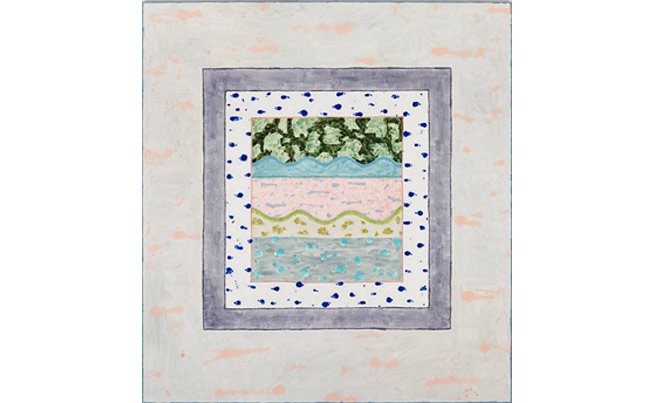 Rebecca Morris in The Curve at Wallspace

NEW YORK – Wallspace is pleased to present The Curve, a collection of works by six artists that broadly considers objects and their depiction, as well as how pattern and surface can be mobilized to wide-ranging, often delirious effect. A shared interest in geometric forms – in all of their attenuated, ribald permutations – pervades the show, as does a garrulous palette ranging from treacle to acid rain. A fastidious attention to detail and a palpable joy-in-making links this diverse group, as does a devout belief in the power of objects to entrance, delight and confound.

Jan Groover (b. 1943, Plainfield, New Jersey; died 2012, Montpon-Ménestérol, France) was best known for her constructed still lives and her prescient experimentation with a range of emerging and historical photographic processes. She is represented here by three photographs: two iconic platinum palladium prints of tabletop still lifes and a mysterious gelatin silver print of a hand grasping at a silvery, conical form.

Kristen Jensen (b. 1976, Glens Falls, New York) is a New York-based sculptor working primarily in ceramics. Her theatrical arrangements of mostly porcelain-based objects evince a narrative cadence, while the objects themselves – handmade by Jensen who often learns new techniques to construct them – feel like relics from another era; the care with which they’ve been made gives them an almost devotional air.

Zachary Leener (b. 1981, Los Angeles, CA) lives and works in Los Angeles and contributes two recent pieces in glazed ceramic that mine the freewheeling sprit of the Memphis Group and the Chicago Imagists to create his own compelling vocabulary of forms and finishes. Bubonic shapes are encased in swirling, psychedelic glazes that slide over stained, porous clay, evoking mundane Santa Fe exteriors as if seen on an acid trip.

Monique Mouton (b. 1984, Fort Collins, CO) lives between Brooklyn, NY and Richmond, VA. Her eccentrically shaped canvases employ a light touch and modest approach to create deceptively simple compositions that seem to will themselves into being through cumulative color washes, brush strokes and a sidelong color palette. Anthropomorphic and with a reticent presence, these quiet works invoke prolonged contemplation.

Rebecca Morris (b. 1969, Honolulu, HI) lives and works in Los Angeles. Her paintings are jubilant agglomerations of geometric forms, color stains, grids and linear forms that seem to collude to breathe new life into abstract painting through an acute and distinctive sense of color and gesture.