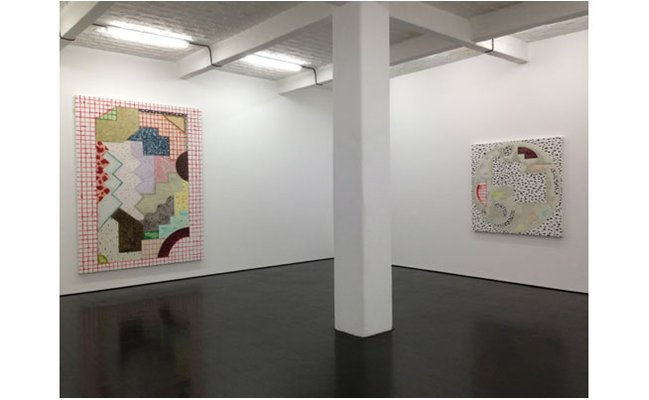 BERLIN – Galerie Barbara Weiss presents its third solo show by the Los Angeles-based American painter Rebecca Morris (*1969 in Honolulu). A selection of new paintings from 2010-2013 will be exhibited, which have been recently shown at the Kunsthalle Lingen and that will further be presented at the Bonnefanten Museum in Maastricht in spring 2014.

Morris’ often-colorful paintings stand for a powerful, undisguised, but also ‘cool’ approach to abstraction, in which she combines various painting techniques and styles. Searching for clearly recognizable references will be a vain attempt and it is precisely this that brings a special quality to her work; since it is not about a clever conceptualized‚ ‘network-painting’. Rebecca Morris’ works are impressive testimonials that form out of a longstanding painting practice based more on enthusing intuition – rather than on calculated strategy – which is still dominated by the central question, how one paints a ‘good painting’. Her statement “Making a good painting is one of the hardest things you’ll do”, is a continuing theme within her practice. In her current position as a mid-career-artist, she is focused on developing herself, rather than in a (‘success’) model. Purposefully has she chosen, #18, as her exhibition title, these digits standing for this being her 18th solo show. On a subtle note, she points to the challenge of conceptualizing yet another new solo exhibition while at the same time the question resonates of when an artist should or could speak of ‘being-grown up’ or even ‘mature’.

Rebecca Morris’ paintings from previous exhibitions were mostly known for single painting elements that were tightly spaced together or sometimes even reflected over imaginary axials of symmetry. The new works, however, show often light and inventive arrangements, in which individual image fragments ¬– under which clear geometrical forms, parts of shapes or even indefinable color stains, blobs or ornament clusters – are free-floating within a set framing line in front of a vibrant coloured background. One gets the impression, the artist has stretched out her vocabulary and placed it under a magnifying glass, in order to analyse it more thoroughly. In contrast, there are also more compressed painting compositions, which similar to her older works, seem to use the canvas to its full extent; recurrently we find passe-partout-like frames or built-in grid structures, which ascribe an almost analytical level to their seemingly nonchalant patchwork of shapes and patterns.

Beginning of 1980’s the Italian Designer-group Memphis was formed. The aim of the group, which included Ettore Sottsass and Michele De Lucchi, was to develop a ‘radical’‚ ‘provoking’ and unpretentious design, in which – breaking away from the Form-Follows-Function doctrine of the Bauhaus movement and the Ulmer school – everyday elementary forms were combined with relish and coated with colourful plastic laminate. While not everyone might be attracted to this playful approach of the named ‘postmodern’ epoch of the early Memphis group, that has by now set its foot into almost every household by the likes of Alessi and Co., it is possible that a similar energy and impertinence is experienced when looking at Rebecca Morris’ new works.