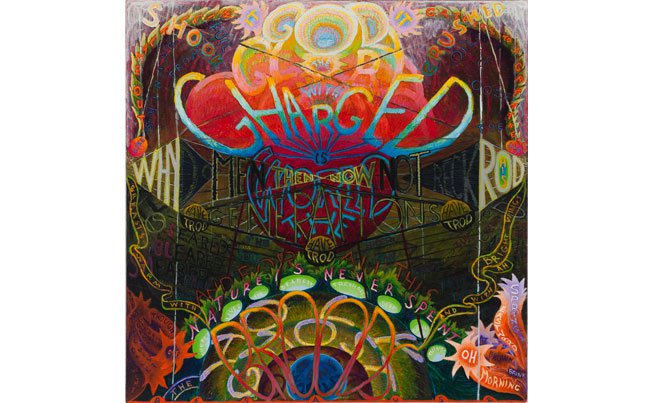 Philip Hanson in -scape at Zhou B Art Center

The suffix –scape is abstracted from the word “landscape”, representing form, formation, shape, scene, picture, and view. The idea of “scape” engages with each work, in relation to its individual affect and content. By comparing different artist’s works across media, the exhibition creates a dynamic conversation.

Max Hattler approaches film as an extension of abstract painting rather than traditional cinema. 1923 aka Heaven + 1925 aka Hell is a two-channel video installation inspired by two paintings from the French outsider artist Augustin Lesage, both called A symbolic Composition of the Spiritual World. The screens incarnate two canvases with images moving in a virtual space. X is a more recent animation film exploring visual ideas of repetition, symmetry, shapes, and patterning, and extending his interest in spirituality and cosmology.

In contrast to Hattler’s mechanical computer simulation, Philip Hanson’s paintings result from the organic modeling process in a human brain, in particular how Hanson maps his mind to a visual order according to his built-in algorithm. In the last two decades Hanson has created intricately patterned wordscape paintings, in which he layers words in various shapes into a spatially symmetric structure under intense lighting that symbolizes an opera stage. The words in his paintings are mostly taken from poems by Emily Dickinson and William Shakespeare on topics such as death, eternity, love, identity, desire, moral, struggle, etc.

Sharing a similar subject interest concerning aspects of humanity, Mo Chen presents two series of her paintings in this exhibition. Her small landscape paintings are her visual diaries, in which she not only observes the environment where she lives, but also describes her experience of living inside. Intersecting the attitude of distance and intimacy, her large abstract works are her mindscapes that codify and transcend her real life experience to the physicality of her mind in an illusionary space.

Alan Kwan’s Bad Trip: Navigate My Mind is a videogame installation that allows people to navigate the creator’s mind in an immersive environment using a game controller. Since November 2011 Kwan has documented every moment of his life with a video camera mounted on his glasses. Based on this digital database of visual memories, he created a virtual tour to his abstract mindscape.

The Gap 3 is a one-channel video installation by Snow Yunxue Fu. Fu’s work embraces the virtuality of video and objectivity of installation, a metaphor of her balancing between the physical and metaphysical spaces. The Gap 3 manifests a window through which we look at a parallel world inside a biomorphic space. Inspired by traditional Chinese landscape painting, Fu creates topographies that exude an air of tranquility and mystery.

Departing from his practice of well-defined paintings and discarding materiality in the process, Philip Vanderhyden has pursued a new interest in using computer software as a medium to create digital images. His new work Head and Shoulders Pattern is a two-channel video projection. The video shows moving images of objects that mostly take the form of jewelry. The obscure logic behind these objects comes from his psychic reading of people’s behaviors in relation to their psychological spaces. In other words, this piece is about social experience, paranoia, and escape.

On the contrary, the new-media artist Jon Cates’ work escapes from the coldness of digital world and the rigidly ordered machines to embrace materiality, chaos, and the warmth of human contact. Hisµ 4\/\/Ɍ (ɔ )H̶ !\/Ǝ (pronounced “raw archive”) is a conceptual object in the form of a USB stick embedded in a corner stone fragmented from a white brick wall. The USB drive contains the compressed archive of Cates’ entire Glitch Art activities including raw materials, source codes, and primary texts since late 1990, which are free for download. The piece serves as a vector portrait of Jon Cates and an unreleased database of Dirty New Media movement.

Besides the media installation, Cates will also perform his work s.d s)a/e.µ4\/\/□(4)H!!\//\LL ((it)rusht and_g)AXXX5–¥–N–_ in the opening and closing of the exhibition. The latter work is a collaborative sound performance by Jon Cates and guest artist Ei Jane Janet Lin. They will perform a folk song duet accompanied by crackles from a old-fashioned radio and other noises. The sound evokes a feeling of wandering in a space from the heartland of USA to the mountaintops of Taiwan, along with imaginary whisky barrel, basement, and Texas ballroom.

Exploring the abstract idea of space through various mediums such as painting, sculpture, installation, animation film, video game, and performance, –scape is an exhibition curated by two curators who have their practices in Painting and New Media Art respectively. Yet each curator carries the background of the other discipline. To put this exhibition together, Chen and Fu find connections across media and at the same time challenge each other with the medium specificities.

The framework of the show also brings the concept of “scape” to another level by exploring the cultural structure of globalization, in particular ethnoscape, mediascape, technoscape, and ideoscape, coined by social-cultural theorist Arjun Appadurai. The integration of the work grapples with the limitations of media and celebrates our worldly perceptions through multiUfaceted artistic formulations.

* The exhibition is accompanied by a catalog with an original essay by Chaz Evans, who will also host the panel discussion at the Zhou B Art Center on July 18, 12:30-2pm.