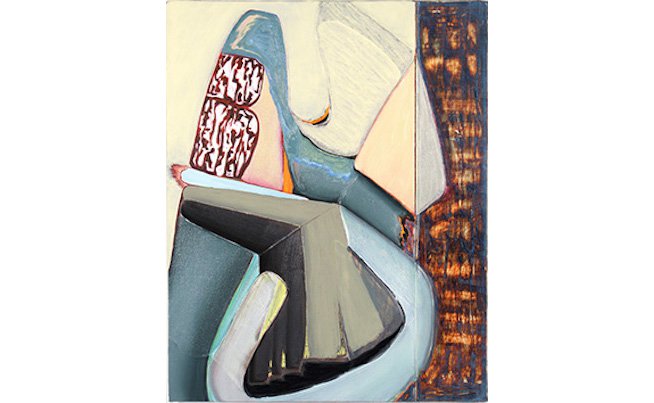 In the gallery project space, Lyles and King is proud to present the New York solo debut of Magalie Guérin.

A Montreal native now living in Chicago, Guérin paints diminutive oil paintings with maximum effect. For Guérin, her canvases – measuring 14 x 11 inches and 20 x 16 inches – are a breeding ground for disparate forms that congest the picture plane, suffusing it with palpable, irresolvable narratives and possibilities. Like Shakespeare’s iambic pentameter or Ryman’s white, Guérin uses self-imposed restrictive parameters to generate singular work. This is evident in the two bodies of work on view: the Hat series, and Bondage series. The Hat series began in 2012 using a generic bowler hat as an arbitrary form in which to generate a host of other forms and suggestions. As she says, “The shape has exploded. I am not bound by its contours anymore.” The Bondage series generated out of a formal struggle with the difficulty of painting across contour lines. To counter her aversion, she now buries a network of strings into the surface that she tears from the surfaces to gash a network of grooves that leave her no option but to transgress them. In all of these paintings, Guérin builds dense, fleshy surfaces that rise from the flat canvas, besmear it, and transform it into a vision all her own.