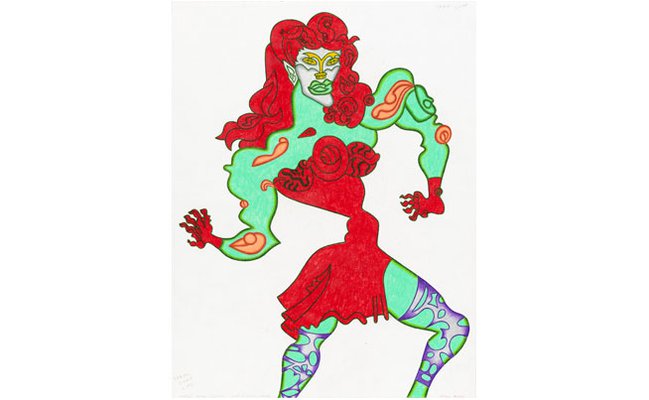 In 1966, an enigmatic exhibition in Chicago bore the title: The Hairy Who.  The first gathering of a loose group of artists known subsequently as the Chicago Imagists, The Hairy Who mounted several shows before the end of the ’60s, as did two other exhibition groups, The False Image and The Non-Plussed Some.  With a wildly exuberant and eccentric sensibility, the Imagists created paintings and objects that explored the deepest and darkest niches of the human psychosexual experience, drawing on commercial and self-taught art, Surrealism, Pop, and something else completely original and totally weird.  The Imagists were widely known in the 1970s and 1980s, and they have continued working, forging divergent paths from a common ancestry.

In this exhibition, Karma International presents the first survey of Chicago Imagist work to be shown in Switzerland, focusing on three key artists, with examples of work by four other important participants.  Karl Wirsum’s paintings and drawings were central to the Hairy Who exhibitions, and he continues to be a stalwart Imagist, creating strange and inventive figurative works, sometimes with a robotic or science-fictive orientation.  Philip Hanson was part of the concurrent False Image group, and his ’60s and ’70s paintings explored the series and the notion of transformation of one image into another.  Hanson’s contemporary work is quite different from the earlier paintings, focused on elaborate, often diagrammatic settings of poetry by Shakespeare, Dickinson, and Blake, with hyper-active, electric color combinations that vibrate and shake in unimagined ways.  Although he was not part of any of the official Imagist exhibition groups, Robert Lostutter was painting fastidious, beautiful figurative paintings in the ’60s, inspired by Richard Lindner and erotic fantasy.  Over the last 15 years, Lostutter has created a cast of characters that are hybrids of men and flowers or birds; frightening and intoxicating, they’re utterly unique extensions of the Imagist tradition.

In addition to vintage and contemporary examples of Wirsum, Hanson, and Lostutter, works by Christina Ramberg, Art Green, Gladys Nilsson, and Ed Flood will fill out the Imagist experience, placing the paintings and objects in a rich historical and artistic context.

The exhibition runs through November 2, 2013.