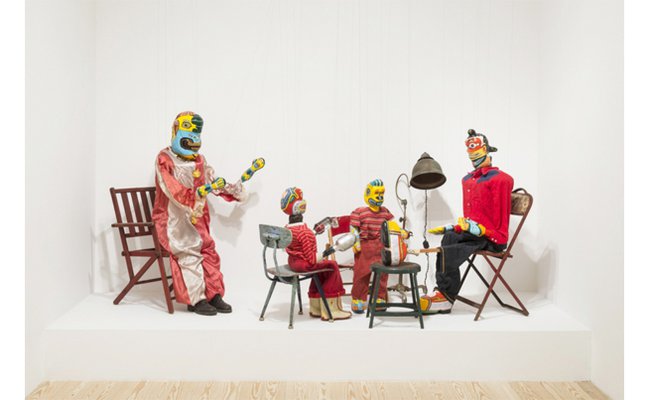 Karl Wirsum, The Hard Way: Selections from the 1970s

NEW YORK – Derek Eller Gallery is pleased to present a solo exhibition of drawings, sculptures and paintings created by Karl Wirsum in the 1970s. That decade was Wirsum’s most restless period geographically and artistically, as he moved back and forth from Chicago to Sacramento and experimented with materials, formats, and visual languages.

With the close of the 1960s and the final Hairy Who exhibition, Wirsum began moving away from conventional art objects and into puppets, display  signage, kites, and mannequins. His visual language changed, too, leaving behind the curvilinear forms and high-key color paintings for which he was known, and initiating a hard-edged geometric language with fewer colors and a focus on the possibilities of working with the entire human form, not just the bust.  These changes were, as Wirsum has done for fifty years, worked out in detail via drawing after drawing of the possibilities for each three-dimensional object or painting.

Fascinated by Halloween masks and decorations, Wirsum began constructing a series of “cardbroads”, full-figured posable chip-board humanoids held together by grommets. These figures gave way to jack-o-lantern-like faces and monstrous beings drawn in black ink on white board, a pared down mode that allowed Wirsum to explicitly explore high contrast forms related to his love of both black and white daily comic strips and continued engagement with Mesoamerican patterning.

In 1971, Wirsum and his family moved to Sacramento for a change of pace. The Wirsums stayed in California for two years, during which the artist’s primary focus was a series of handcrafted painted wood marionettes which he envisioned as performers in his own theatrical company. These marionettes, eventually displayed at the Phyllis Kind Gallery in Chicago upon Wirsum’s return, were further investigations into the full human form, as Wirsum gave life to nuclear families, acrobats, musicians and magicians.

Upon his return to Chicago, Wirsum continued his explorations of the possibilities of bodily distortions, completing a series of paintings and drawings of ice skaters possessed of bulbous appendages imagined by Wirsum to be the result of athletic activity focused solely on the lower half of the body. Those bodies were then matched by the artist’s facial investigations. Wirsum’s Marcel Dude-Champ is a hanging sign of stacked heads inspired by Man Ray’s 1924 series of photos of Duchamp in various states of lathered disguise. As though offering models for his salon, Wirsum altered six Styrofoam wig forms, investing anonymous heads with individual personalities by giving each distinctive facial features. Finally, as the decade wound down, Wirsum circled back to his Chicago roots, completing a suite of drawings and prints entitled How To Draw Dick Tracy the Hard Way. Dick Tracy and his creator, Chester Gould, being primary inspirations for Wirsum, as well as Chicago icons. The “hard way” here, is straight on portraiture— Tracy was nearly always shown in profile, so Wirsum abstracted the character, expanding the geometry of his design, and, as he had with so many other symbols and objects around him in the 1970s, making it entirely his own.