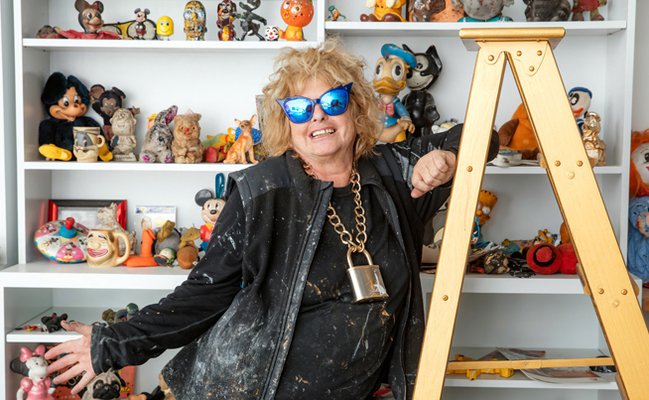 NEW YORK – “I’ve always wanted to make art that trashed up a good white-cube gallery. I need to work in a place where the stuff and I basically become one.”

“It’s getting there,” the painter Joyce Pensato said. Hands on her hips, she was scrutinizing the cluttered, paint-splattered length of a studio in Bushwick, Brooklyn, that she moved into about a year ago, after the building that housed her previous studio, a spiritual sanctuary for more than 30 years, was sold. “I need to get this a lot dirtier, a lot more stuffed. But it takes time to trash something up just the way you want it.”

Even among painters who thrive in the existential slop of a messy studio, Ms. Pensato, 75, is a local legend. Through years of working in exalted obscurity — beloved by fellow artists, mostly ignored by bewildered collectors — and then as her star slowly began to ascend over the last decade, she has maintained working conditions that might cause Pig-Pen to call in a hazmat crew. The longtime subjects of her chaotically elemental portraits — cartoon characters like Batman, Mickey Mouse, Felix the Cat, Homer Simpson and, more recently, Stan Marsh from “South Park” — are derived from her collection of toys or figurines, which are strewn around the floor, crowded into shelves and pinned to the walls, each covered in the paint drizzle and ambient muck that is part of Ms. Pensato’s process.

On the occasion of her inclusion in “Fast Forward: Painting From the 1980s,” opening next month at the Whitney Museum of American Art, she invited me over to see them. These are edited excerpts from our conversation.

Where do you get all these toys?

Well, now it’s mostly eBay, which is kind of boring to say, but in this neighborhood people used to just throw all their things out on the street and I’d pick through it. What you see here is just a fraction of what I have. Oh, honey, there’s a whole warehouse of it down in the basement.

What drew you to cartoon characters? I know that you seem to be constantly beating down metaphorical readings that your subject matter is a dark commentary on consumer culture or childhood or America itself.

I got into Mickey Mouse early on, really, because of his shape. The ears, the eyes, the circles, how simple he was but also how great those shapes looked in a painting. And I think I’ve made him a Mickey who is not just a happy Mickey; he’s got a lot more substance than that, more character. [Ms. Pensato shifted her attention to a Mr. Potato Head plastic toy on a nearby shelf.] Look at the eyeballs on this guy!

Why do you love a messy studio?

I think it’s just who I am. I’ve always wanted to make art that trashed up a good white-cube gallery. I need to work in a place where the stuff and I basically become one.

You grew up in Bushwick, the daughter of a Sicilian-immigrant father and an Italian-American mother. What was this neighborhood like in your youth, before it became Young-Artist Central.

It wasn’t really tough. It was provincial. Then it got tough. And then it got expensive. For some reason, I just never left.

How did you make ends meet when your work wasn’t selling?

I worked in an art-supply store. I did what I had to do to eat. And I borrowed money from my family from time to time. They’d say, “Joyce, you’re taking us to the poorhouse!”

I’m looking around, and four of the paintings that you now have underway are huge. Is that some kind of statement?

Yes. As I get older and shorter, I’m thinking bigger.