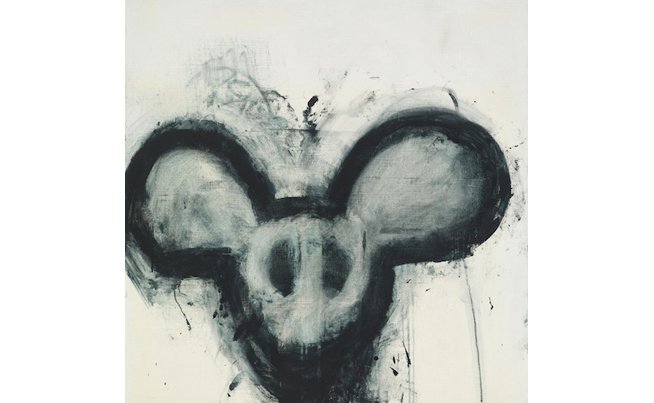 I was supposed to have my first ever solo show in the East Village at Fiction/Nonfiction gallery in 1991. A couple of the Mickey Mouse drawings I had started doing were going to be in it. For two years I’d been making work for this show, and just a couple of weeks before it was supposed to go up, it got canceled. The guy who ran the gallery came to me at the last minute and said I wasn’t ready. I was so shocked, crushed. Devastated. This was supposed to be my big break, you know? The world just fell apart. And I told everyone about it, too—my friends, my family. You know what my mom said to me? “We always knew it wasn’t going to happen.” Ha. Thanks, Mom.

Anyway, the cancellation forced me to really look at what I was doing and thinking about, and what I liked looking at. For the longest time I’d been torn, divided—I had two sides to me as an artist, and I was longing to just become one, totally unafraid of who I wanted to be. One side of me was making these colorful, atmospheric, AbEx-y landscapes, while the other was making these charcoal drawings that were simple, black-and-white, graphic. And I really wanted to make the drawings paintings—it just made sense to me. I like being messy and I love throwing paint around and fucking it all up. But I also like the structure drawing provides.

The untitled Mickey painting from 1992 that’s going into the Whitney show is maybe the first or second Mickey painting I’d ever done. The painting was based on a rubber Mickey Mouse head someone gave me—such an unhappy-looking guy—found in a garbage dump. It looked like something out of Edvard Munch, really deep and brooding. I thought it was funny when I was approached about being in the “Fast Forward” show because I had nothing to do with the ’80s. I was the artist looking in on the ’80s. I saw a lot of people getting attention and shows, but I was so far outside of all that. At that time I was stuck in East Williamsburg—hardly any artists around! I could barely get anyone to come over the bridge and see my work. I was in Brooklyn with another painter friend of mine, Carl Plansky—we were pioneers. I’m still in Brooklyn, but believe me, I never want to be a pioneer again.

I didn’t feel like I was having problems as an artist because I was a woman. I just thought of myself as a struggling artist trying to get recognition—I wanted to show my work somewhere. But I know women get a lot of shit in the art world. I’ve become a lot more aware of this since the ’90s. I also have great painter friends like Marilyn Minter. Marilyn told me about all the difficulties she’s encountered.

I’ve had so many incredible people in my life. Thea Westreich was like my fairy godmother in the ’80s, collecting my work and boosting me up. Mercedes Matter was the first person to see my Mickey drawings and really encourage me in that direction—she was one of my teachers and mentors at the New York Studio School when I was a student there. I met Christopher Wool at the NYSS as well. He introduced me to my first collector, his dad, Ira, who was like a proud father, my biggest cheerleader. The Woolies are very important to me. Joan Mitchell was a mentor of mine too. But she could be kind of brutal. She would say, “Do you want to be one of those German Expressionists, all dark? Or do you want to be one of the French painters, like Matisse or Cézanne, with light and color?” I wanted to please her, of course, so I’d say, “I want to be French!” But I realized I was one of those expressionist painters. The last time I saw her, she was at my first group show in Paris. God, she just loved giving me a hard time. She would say, “Are you still doing those animals?”—meaning Mickey Mouse and Donald Duck; or, “Do you still have that skin disease?”—referring to the rough textures I like using in my work. Ha—she was a tough broad.