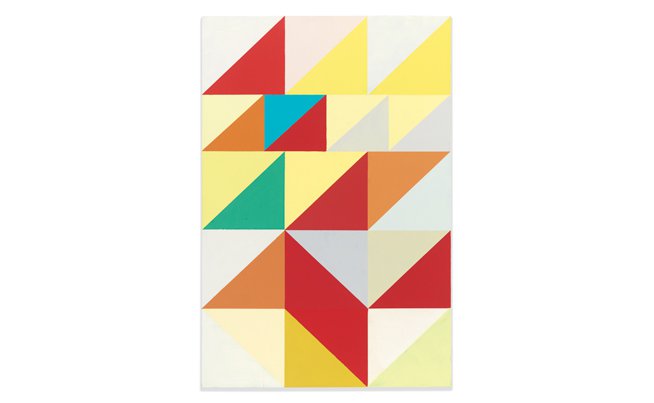 HOUSTON – Sicardi Gallery proudly presents the upcoming exhibition, John Sparagana: Breather, which marks the artist’s first solo show at the gallery. This new series of paintings, exhibited here for the first time, underscore Sparagana’s analytical entanglements with modernist doctrines.Enmeshing his investigations of American comics, publicity, and advertisements within the structural mechanism of the grid, the artist places mass media at the center of modernism itself. In these works, Sparagana blurs and erases figures and texts–pulled from classic comics such as Dick Tracy and Nancy–distorting them to near indecipherability within rhythmic patterns, reconfigured into grids contaminated by narrative. This reduction evolves into a generative system, evoking procedural repetition associated with geometric abstractionism as much as the life-sustaining act of breathing itself. Please note the exhibition has been rescheduled due to Hurricane Harvey.  The artwork will be installed and on view by Thursday, September 14.  A cocktail reception with the artist will take place later this month on Thursday, September 28, 6-8pm.

John Sparagana received his MFA at Stanford University in 1987. He is the recipient of numerous awards and fellowships, from the Cité Internationale des Arts of Paris, the National Endowment for the Arts, and the Cultural Arts Council of Houston. Sparagana’s work has been exhibited across the globe in cities such as New York, Chicago, Zurich, Los Angeles, San Francisco, Houston, Berlin and Paris. His pieces form part of the collections of the Art Institute of Chicago, the Museum of Contemporary Photography, Chicago, the Museum of Fine Arts, Houston (MFAH), and the Denver Art Museum, among others. Sparagana is the Grace Vietti Chair in Visual Arts and Chair of the Department of Visual and Dramatic Arts at Rice University, where he has served on the faculty since 1989.