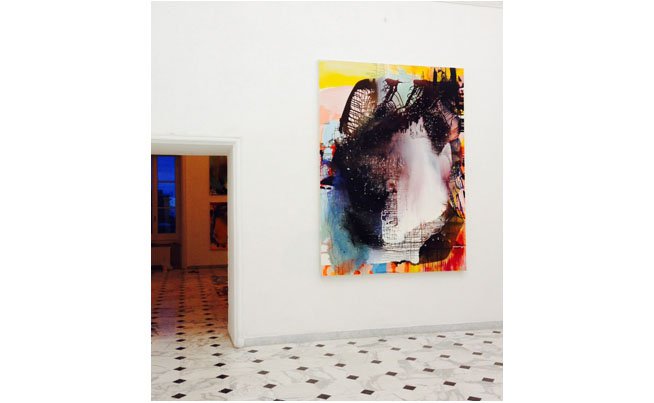 GENOVA – On January 16th, Jackie Saccoccio will open an exhibition at the Museo d’Arte Contemporanea di Villa Croce, her the first solo exhibition to be held in a European museum.

For the exhibition Portrait Gallery in Genova, the artist will show a new series of works; the installation situates the paintings, with their brooding and centripetal masses, in dialogue with the rooms of the villa responding to its monumentality and mimicking the classical display of a picture gallery. Within the villa’s whitewashed rooms, her large densely clotted abstract paintings offer contrast to the blistering light that bounces off the parallel sea.

In the grand frescoed room, the artist creates a gallery of portraits flooded with works and colors, wherein each canvas radiates with an aura of presence. Hung as a series of official portraits, each painting features an abstraction whose shades and shapes convey the essence of a personality, while weight, hues, and the overlapping layers of painterly substance have a soul of their own.

As a counterpoint to the portrait gallery a room, titled Portrait (Absence), stands apparently vacant. The artist realized a monochromatic wall-drawing (almost a sinopia for a fresco) of non-intersecting lines interspersed with empty areas implying displaced paintings. The white shadows left by the missing portraits are a powerful image of absence, as opposed to the overwhelming richness of the adjacent room, and trigger a dynamic interplay of empty and full. In the artist’s words: “I see painting as an additive, improvisational occupation, and use pigment, oils and minerals in varying degrees of liquidity to apply layer upon layer. When I began the portraits, alchemical interpretations of 15th – 17th century portrait paintings, I realized I wasn’t developing passages toward a visually penetrable space in painting, but building an object, more like a sculpture. I cover things, but rarely edit or wipe off. I want the canvas to record the entire passage of the painting experience, including whatever self-doubt and bravado that goes into its making – each layer reflecting the gestural experience of the moment, so that the canvas is a record of the daily shifts in expression/execution – a psychological form of cubism.” (JS)