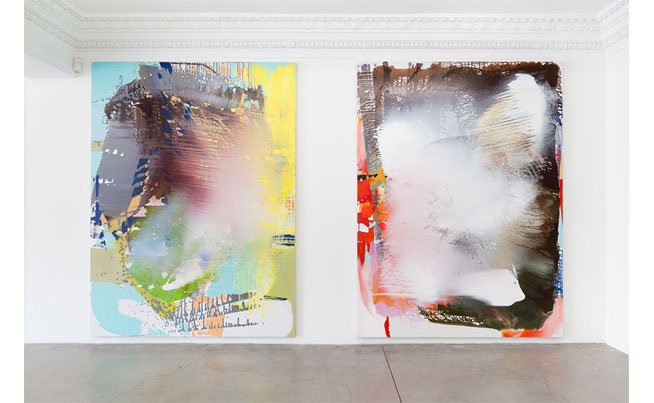 NEW YORK – Through May 18th, new paintings by artist Jackie Saccoccio are on view at Eleven Rivington.

Eleven Rivington is delighted to present Jackie Saccoccio’s fifteenth solo exhibition and her fourth with the gallery.  The exhibition will feature new large-scale paintings and is on view at both gallery locations at 11 Rivington Street and at 195 Chrystie Street from April 17 – May 18, 2014.  Saccoccio was recently featured in two museum exhibitions at the Nerman Museum of Contemporary Art, Overland Park, KS, organized by Bruce Hartman; and at Museo d’Arte Contemporanea, Villa Croce, Genoa, Italy, curated by Ilaria Bonacossa.

Saccoccio pushes her exploration of the concept of portraiture and the idea of presence in painting in this two-venue exhibition.  At the Rivington Street gallery, she applies this construct to the conception and installation of the works, presenting a contemporary portrait gallery with abstract masses installed high, and cheek by jowl. At 195 Chrystie Street, three imposing pairs of profile-type pictures comprise the exhibition.  In the four works titled Profile (Roy II, Convex), Profile (Roy II, Concave), Profile (GT Concave) and Profile (GT Convex), the captions refer to attributes of two seminal profile paintings, Chuck Close’s 1994 painting of Roy Lichtenstein and Domenico Ghirlandaio’s 1488 depiction of Giovanna Tornabuoni. The third pair offers depictions of characters from one of Ovid’s tragic couples, in Profile (Echo) and Profile (Narcissus). Writing in the catalogue for the artist’s Villa Croce exhibition, Ilaria Giani states:

“Acting as metaphors of a complex discourse, the works resist any direct references to the subjects declared.  Through layers of paint applied in an utterly abstract gestural style, which seem to cover instead of disclosing an image, the pictures record time, summing up the experience of looking, processing, and representing.”

Jackie Saccoccio was born 1963 in Providence, RI and currently lives and works in CT.  The paintings in this exhibition were created in Rome, Italy in 2012-13 and in CT in 2014. Saccoccio’s recent solo exhibitions include Brand New Gallery, Milan and Corbett v. Dempsey, Chicago, IL.  Group exhibitions include The American Academy in Rome, Italy; The Addison Gallery of American Art, MA; RISD Museum of Art, RI; Harris Lieberman, NY; Greene Naftali, NY; and Barbara Gladstone Gallery, NY, among others.  She is a recipient of the Rome Prize at The American Academy in Rome, a John Simon Guggenheim Foundation Grant, and a Fulbright Foundation Grant. Saccoccio received a BFA from the Rhode Island School of Design and an MFA from the School of the Art Institute of Chicago.