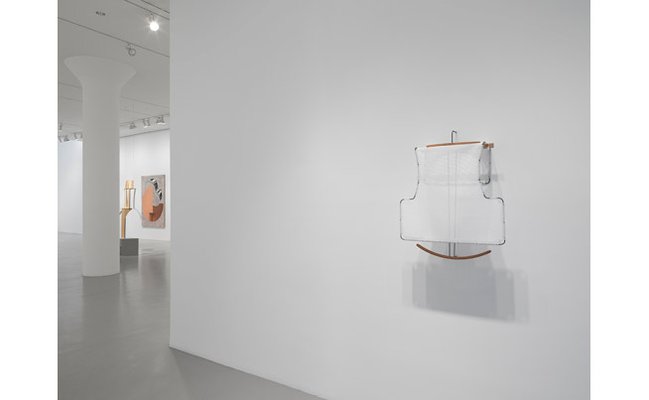 NEW YORK – Mitchell-Innes & Nash is pleased to present a three-person show with Jo Baer, Anne Neukamp, and Diane Simpson. This will be the gallery’s first time exhibiting work by these three artists and will include a range of paintings and sculptures from 1978 to the present. The exhibition will be on view from December 13, 2014 through January 24, 2015.  Please join us for the opening reception on Saturday, December 13 from 6 to 8 pm.

Although their aesthetic practices differ, Baer, Neukamp, and Simpson all produce work that abstracts its original source material in order to create a new visual conversation between forms in space.  All three artists borrow and adapt source materials from a range of outlets, which include the common culture of branding, iconography, and figuration. Works such as Latz (2014) depicts Neukamp’s ability to create almost vector-like graphics, which oscillate between ambiguous planes of texture, geometry and color.  In turn, Baer’s paintings reveal wavering forms that entice the viewer to make his or her own visual connections between imagery that seems at once foreign and familiar.  Similar to both Neukamp and Baer’s paintings, Simpson’s approach to sculpture in works like Mesh Bonnet (1992) comparably dismantles an existing form, before reconfiguring it into a new compounded construction.

Cohesively these three artists all pull from the culturally familiar and through various methods of distortion—cropping, reconstruction, and overlay—investigate the volatile boundary between abstraction and representation.

About Jo Baer
Jo Baer lives and works in Amsterdam, Netherlands.  She has had solo exhibitions at institutions such as Museum Ludwig, Cologne; Stedelijk Museum, Amsterdam; and Van Abbemuseum, Eindhoven.  Her work has been included in recent group shows at Museum of Contemporary Art Grand Avenue, Los Angeles; The Clark Art Institute, Williamstown, MA; and Korean Biennale, Busan.

About Anne Neukamp
Anne Neukamp lives and works in Berlin, Germany.  She has had recent solo exhibitions at the Kunstverein Oldenburg and the Musée Wilhelm-Hack-Galerie Rudolf-Sharpf, Ludwigshafen, both in Germany.  Her work has been exhibited in group shows at KunstWerke Institute for Contemporary Art, Berlin; Centre d’art de Guyancourt, Guayancourt; and Fondation Arthena, Düsseldorf.

About Diane Simpson
Diane Simpson lives and works in Chicago, Illinois.  Recent solo exhibitions of her work have been mounted at JTT, New York and Corbett vs. Demsey, Chicago.  Her work has been included in group shows at the Art Institute of Chicago; Museum of Contemporary Art, Chicago; and White Columns, New York.