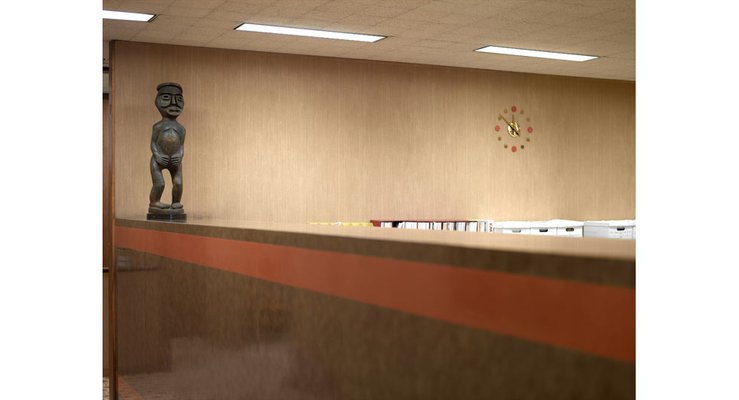 The 11-story Modernist building, home to Jet and Ebony magazines starting in 1971, was heralded as the first major downtown Chicago building designed by an African-American architect since the 18th century. Granted unprecedented access to film and photograph in this John Moutoussamy–designed building, Hartt beautifully and earnestly records the time-capsule nature of the space, which meticulously retains Arthur Elrod’s original 1971 interior design. The building was purpose-built as the headquarters of this important publishing company, and its interior is a clear and exuberant expression of Black taste, resolutely modern, colorful, and complex, a pure expression of founder John Johnson’s vision of what a leading Black-owned business can be.

Hartt’s film and photographs are intimate portraits of the dreams and ideals of the Johnson family’s business, which continues to exert a force in American culture, as well as a kind of elegant forensic investigation into the power of cultural icons. “Stray Light” is a term used to refer to unpredictable light within a controlled environment, a fitting metaphor for this outside observer let into this inner sanctum of African American cultural history. Hartt’s works raise questions about the commingling of the personal and the public, the narratives and ideologies that underlie the Johnson firm, and their lasting impact today. Further, the project is also an elegy, or at least examination, of the pervasive cultural condition of our transition to digital culture, away from the dominance of print media our lives. The physical—the site of the building and also paper itself—is replaced and decentralized. Hartt’s project became even more poignant with the unexpected news that the building was sold in late 2010 and the company was relocating to another site.