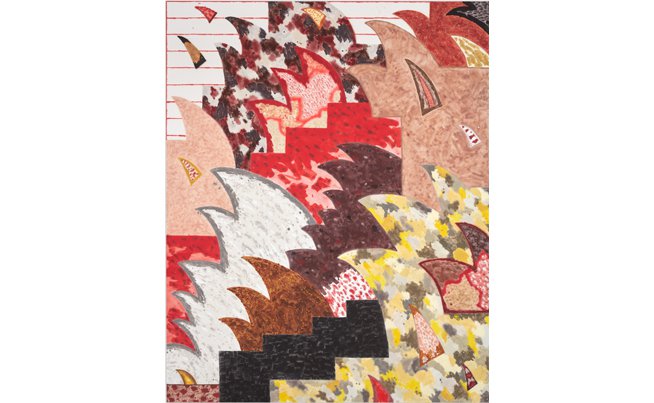 Corbett vs Dempsey at Condo 2018

NEW YORK – Corbett vs. Dempsey is proud to participate in Condo 2018, at Bortolami Gallery, in New York City, with a solo exhibition of new works by Rebecca Morris and a historical work by Edward Flood.

In her “Manifesto for Abstractionists and Friends of the Non-Objective,” painter Rebecca Morris offers a potent line in which one can find much of her artistic project:  “Strive for the deeper structure.” Morris is a formalist whose work burrows its way through form, as Henri Michaux once said of style: “Go far enough into yourself that your style can’t follow.”  In large scale canvases, with interleaved segments that create combinatory vibrational tension and resolution, or using charged materials from ultrathin washes to thick skeins of metallic paint, Morris pushes form into another realm, where it is as much an energy as a set of constraints – form as ambience, form as tonality, form as interior monologue.  Based in Los Angeles, Morris was included in the 2016 Hammer Museum biennial, “Made in L.A.,” as well as the 2014 Whitney Biennial. Recent solo exhibitions include Corbett vs. Dempsey, Chicago; Galerie Barbara Weiss, Berlin; Mary Boone, New York; 356 Mission, Los Angeles; LAXART, Los Angeles; and the Bonnefanten Museum, Maastricht. Her work is currently on view in “Inherent Structure,” an exhibition at the Wexner Center for the Arts, Columbus.  For Condo, Morris will present major new paintings and a selection of more intimate watercolors, as well as a small triangular canvas.

Originally a member of the 1960s Chicago Imagist group called the Nonplussed Some, Edward Flood moved to New York, where his worked shifted towards abstraction and he explored a more post-minimal set of ideas in his sculptures.  By the late 1970s, he was working on elaborate installation pieces, often with elements projecting out from the wall like fins. These elements, which had once been independently hung in clusters, amalgamated into massive, curvilinear, immaculately constructed and beautifully painted bundles of acrylic on wood.  Flood, who died tragically early, barely into his forties, made his masterpiece in this mode in 1980, an enormous work titled “Diamondback.” In 2017 a large selection of Flood’s work was exhibited at the Prada Foundation, Milan, as part of the exhibition “Famous Artists from Chicago.” Later this year Flood’s work will be included in the exhibition “3-D Doings: The Imagist Object in Chicago Art, 1964-1980,” at the Tang Museum and in 2019 in the exhibition “Chicago Imagists” at CCA Goldsmiths, London.  CvsD is pleased to show “Diamondback” for the first time in New York at Condo 2018.