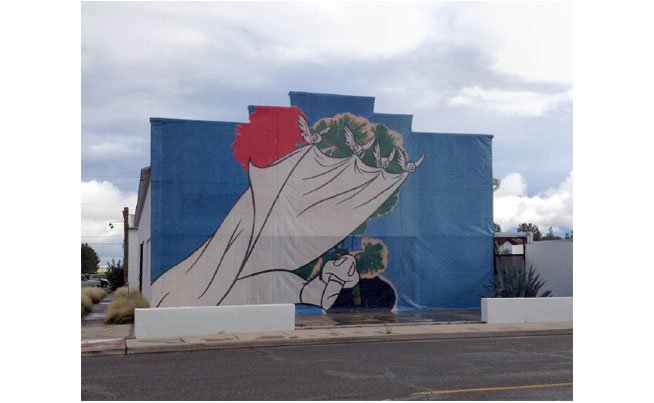 MARFA – Arturo Herrera unveils a massive installation for Comic Future, an exhibition at Ballroom Marfa, featuring work by artists who employ the language of various and discordant approaches such as abstraction and figuration to twist representation of their immediate environment thereby imbricating a skewed, often apocalyptic vision of the future.

Showcasing works from the 1960s through 2013, the exhibition surveys political satire and cultural commentary through art movements ranging from capitalist realism to contemporary pop art. The works include early drawings by Sigmar Polke, collage by Walead Beshty, painting by Carroll Dunham and Peter Saul, alongside newer works by Dana Schutz, Sue Williams, Michael Williams and Erik Parker and sculpture by Aaron Curry, Liz Craft and Mike Kelley. A Ballroom-commissioned site-specific wall installation by Arturo Herrera will complete the show.

Drawing from the art-historical lineage of cubism, cartoons, figurative painting and gestural abstraction, and appropriating subjects from mythology, advertising, print culture and consumerism, Comic Future is as much about the breakdown of the human condition as it is about the absurdities which define the perils of human evolution. The exhibition will be on view September 27, 2013 through February 2, 2014.

To inaugurate Comic Future, Ballroom Marfa will host a weekend of festivities, including an opening on September 27 from 6 to 8pm. The reception also features a performance by Devin Gary & Ross, a visually inclined trio of musicians, also featuring New York avant garde rock legend Kramer. Directly following the opening reception is a community dinner at 8pm under the Shade Structure. There will be an exhibition walk-through with the artists on Saturday, September 28, at 11am.