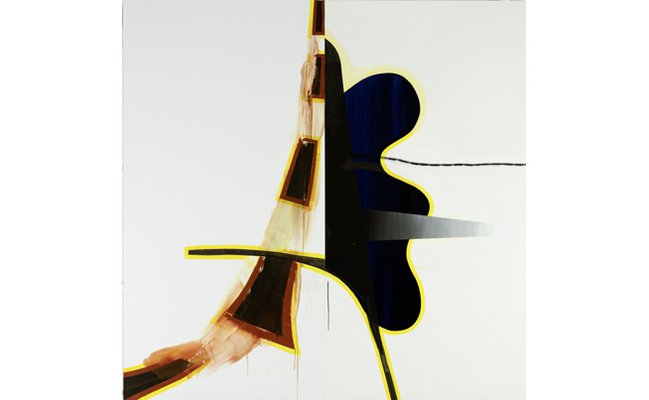 CHICAGO – A Forest of Chaos and Control: The Woods Near Oehle reviewed by Natalie Haddad

Albert Oehlen’s largest US museum show to date, Albert Oehlen: Woods near Oehle at the Cleveland Museum of Art, presents the single motif of the tree to examine the artist’s method of imposing formal and conceptual constraints on his painting in order to detonate them.

Trees frequently figure in Oehlen’s work. As a formal device, it allows freedom of invention, but the invention is structured by internal logic. Curated by Reto Thüring, the museum’s curator of contemporary art, the exhibition features 45 of Oehlen’s large-scale paintings, produced over the past 30 years, as well as contributions from other artists, selected by Oehlen and his friends and collaborators: curator Julie Sylvester; art critic Diedrich Diederichsen; artist Christopher Williams; and musician Michael Wertmüller (the latter two contributing their own work).

Woods near Oehle fills half of the museum’s lower level with the artist’s monumental canvases. The contributions from other artists, most contained within a screened-in space, make the show seem larger still. The unifying theme of the tree conceptually threads the pieces even when it is not visually apparent. This strategy pushes aside some of the diversity of Oehlen’s oeuvre, but it also makes it easier to focus in on his working methods.

Several of the exhibition’s works belong to a recent series of “Baum” (“Tree”) paintings, for which Oehlen limited his color palette and simplified his compositions. In “Untitled (Baum 2),” done in 2014, a black shape composed of climbing tendrils and descending bulbs hovers in front of a gradated scarlet rectangle on a white ground, while in “Baum 18,” from the same year, a cyan rectangle overlaps and partially obscures an animated black line that spans the height of the canvas, preening and stretching its limbs.

Part of the exhibition’s success is that, while Oehlen’s development as an artist is evident — most obviously in the transition his colors and shapes have made from smeared and muddy to contrasting and crisp — it brings to the fore how much his post-2000 works relate to the architectural and dynamic elements in his earlier canvases, and the way the earlier compositions accentuate the chaos brewing in the contained minimalism of the recent paintings.

Three more untitled “Baum” paintings (numbered 54, 55, and 56, all 2015) are structured around a central tubular shape that vertically bisects the canvas, crisscrossed by horizontal “branches” and frenzied streaks and splotches of watery paint. In an untitled canvas done years earlier, in 1989, similar tubular shapes, in shades of brown and green, fan out from the center across a muddy ground.

The 1989 painting is a sharp contrast to the pristine white grounds of the later works, but the correlation is evident — in all the paintings, geometric shapes in solid colors sit atop a blank or murky ground, creating the illusion of two separate planes.

In “Untitled (Strassen)” (1988), a red stripe zigzags across the canvas, creating two triangles, with broken blue lines descending from their peaks, resembling streets (Strassen, in German) disappearing into the distance.

The painting is dizzying, as the red and blue strips assert and recede against a swirl of muted grays, whites, and yellows. The contrast between the triangular lines and the background is like a hallucination in a dense fog.

Oehlen picks up the diagonal motif again in “Untitled (Baum 64)” (2016) and “Untitled (Baum 57)” (2015). For the latter, two forms — one a dark, amoebic mass, like an oil spill outlined in yellow, and the other, a diagonal made of interlocking black-and-tan rectangles — abut at the center of the painting, peaking at the top, while three horizontal lines jut outward, simultaneously compressing and pulling apart the composition.

Just as Abstract Expressionism captured physical tension and menace as well as the postwar zeitgeist in works like “Woman, I” (1950-52) by Oehlen’s great inspiration, Willem de Kooning, “Untitled (Baum 57)” embodies the entropy of two systems pressing against each other in space. If “Woman, I” was an expression of its time, “Untitled (Baum 57)” is one for ours.

The works included by other artists are organized as a kind of group show within Oehlen’s survey, most tucked in between two screens. The tree motif is most prominent in Diederichsen’s picks — a video by Jackson Mac Low (Tree* Movie, 1961/1972/2009); black-and-white photos of barren trees rotated upside-down by Rodney Graham; and a video by Harun Farocki (Parallel I, 2012) — as well as a collaboration between Oehlen and Wertmüller, which pairs a five-minute atonal composition with flickering lights projected onto a potted tree against a translucent screen.

The remaining works have little apparent connection to the theme, but they reflect the exhibition’s broader project of examining Oehlen’s use of pictorial devices and self-imposed restrictions, as well as the influence of past art.

Oehlen has modeled a set of paintings on “Tramonto Spaventoso” (c. 1940-49), a painting from his personal collection by Modernist artist and agitator John D. Graham. He also included a small John Chamberlain sculpture from the CMA’s collection that nicely suggests what the paintings might be like in three dimensions. Elsewhere, curator Sylvester juxtaposes two de Kooning paintings from the late 1980s with some of Oehlen’s light, expressive charcoal sketches.

Well over life-sized, these sketches are the only works of Oehlen’s in the show whose image does not justify the size: the jutting lines and insistent color blocks in works like “Untitled (Baum 64),” and “Untitled (Strassen)” are strengthened by their grandiosity, while the diaphanous line work of the sketches feels weighed down. Yet they reveal another side of Oehlen’s aesthetic, one symbiotic with Surrealist automatism and nature.

One of the most surprising and engaging aspects of Woods near Oehle is the economy of the compositions and colors in Oehlen’s post-2000 painting, many of which are pared down to only two or three elements against the white ground, often gleaming with jewel-like colors. (Oehlen’s work continues along these lines in a concurrent show at Gagosian in New York.)

For the collage-painting “Bäume” (2004), Oehlen’s canvas is a large photographic image of a tree-lined path, glistening with sunlight. In the middle of the pathway he has painted an imposing tree, along with luminous yellow ovals and snaking orange lines to one side. The painted tree’s obstruction of the dappled path and the spray-painted look of the orange lines add an element of prankishness to the image, like a graffiti-tagged billboard, that harks back to Oehlen’s early work.

Oehlen uses collage in a handful of other works, including the jarring inclusion of the head of Chucky, the killer doll from the Chucky franchise of kitsch horror films, on top of a painted tree. The Chucky painting is an anomaly in a show that otherwise emphasizes craft over subject matter, but it provides a glimpse of Oehlen the trickster, responsible for such paintings as “Untitled (A. Hitler)” (1986) and “Self-Portrait as a Dutch Woman” (1983). (The latter was included in the New Museum’s 2015 Oehlen exhibition, Home and Garden.)

The collage counterpoint to the Chucky painting is “Frau im Baum II” (2005), which centers on a classical image of a woman’s face, nestled in an outgrowth of roots and branches, with a branch’s single leaf resting on her forehead.

In this work, as in “Bäume,” the fusion of the collaged imagery (the face, leaf, and branches immediately surrounding the face) with painting (extensions of the roots and branches) is both enchanting and strange; the craggy roots have a creatural quality that threatens the demure face.

Blocks of scarlet behind the head and branches articulate a geometric space that seems at first absent from the visual maelstrom of Oehlen’s earlier pieces, but in “Frau im Baum II” and much of the work on view, what may at first look like random, undirected energy and forms unfolds into a compelling interplay of chaos and control.