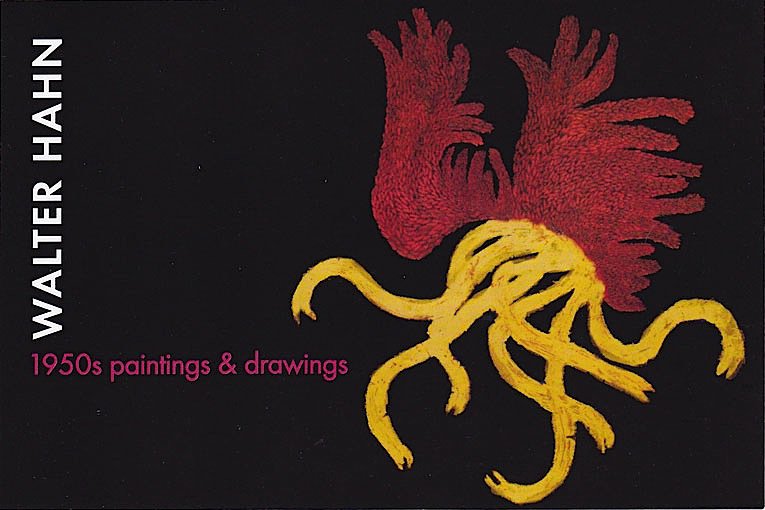 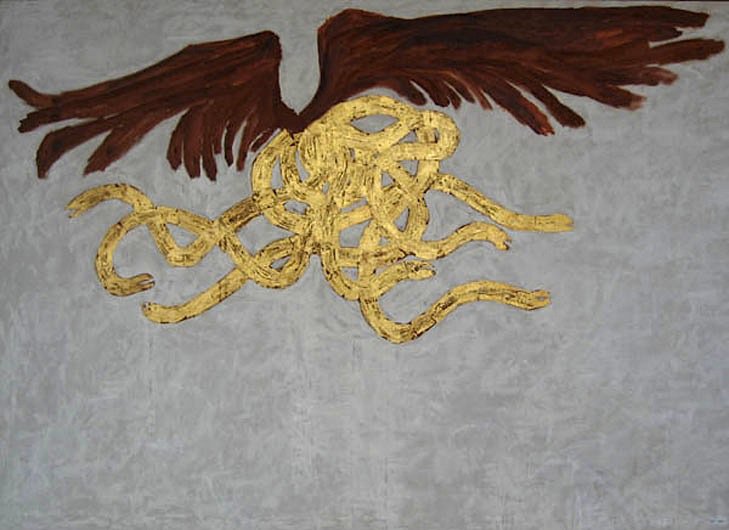 oil and gold leaf on canvas 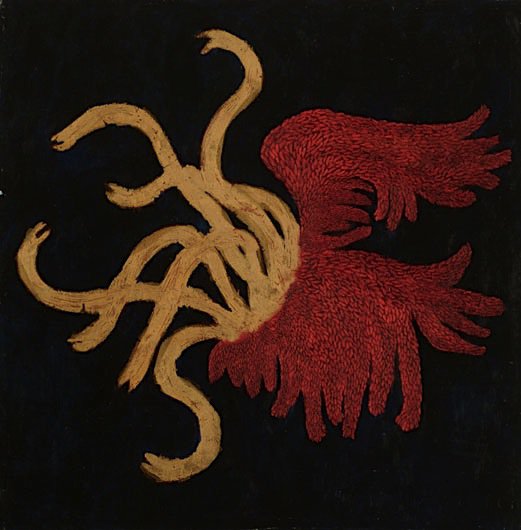 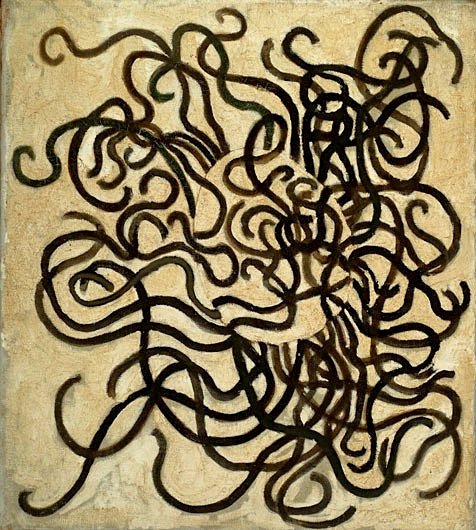 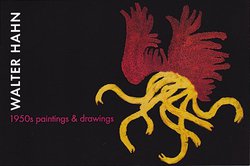 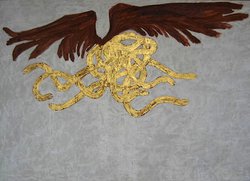 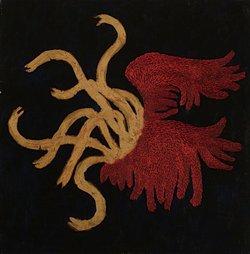 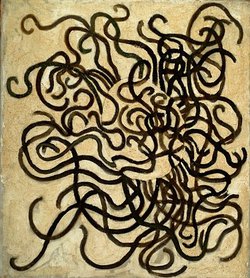 Early in the 1950s, WALTER HAHN was a force to be reckoned with in Chicago painting. In 1951, his final year as a student at the School of the Art Institute of Chicago (SAIC), Hahn won first prize in oil in the Chicago and Vicinity exhibition. As this was a purchase prize, this placed his work in the permanent collection of the Art Institute of Chicago, provoking jealous awe from some of his teachers. Born in 1927, Hahn studied with Kathleen Blackshear and Paul Wieghardt and he was a colleague of Leon Golub, who attended SAIC a year before him. In the early ’50s, Hahn was a central figure in the important Momentum exhibits. Mies Van Der Rohe expressed admiration for FEEDING TIME, his contribution to the 1950 Momentum show, and Golub used the back of Hahn’s extremely unusual painting AQUARIUM, which was shown at Momentum in 1951, as a note-pad on which he scrawled suggestions for potential jurists for that year’s exhibition.

Hahn’s early canvases and drawings are playful, figural and highly architectural, extrapolating from Paul Klee’s delicate lines and angles, but featuring a distinctly American sensibility that might in places be akin to Golub’s early monsters, Gwathmey’s outlined figures and elsewhere Milton Avery’s unmodulated patches of color. The Klee influence make sense, as his teacher Wieghardt had worked alongside the Swiss painter, though when asked whether Hahn’s work reminded him of Klee, Wieghardt said: “No, this painting looks like a Walter Hahn.” A noteworthy feature of Hahn’s style is his obsessive attention to detail – indeed, in some cases hair is painted strand-by-strand, grass blade-by-blade, a tree leaf-by-leaf. Hahn applied this sensibility to his designs for jewelry, which he and his wife Maude made and sold to augment their income. Hahn mounted solo exhibitions at Hull House, ETC Gallery, and the Chicago Public Library, and participated widely in group exhibitions.

In 1955, Hahn was awarded the Prix-de-Rome. While in Italy, he painted large, often mythologically inspired canvases – Janus-faced faced figures, Medusas, 100-eyed women, winged snakes. Late in the ’50s, Hahn moved to New York, where he was represented by Gallery G, alongside an as-yet-unknown artist named Lee Bontecou. By the mid ’60s, his work had grown somewhat more naturalistic, influenced by a growing immersion in Asian culture, and in 1964 he stopped painting and by-and-large left the public artworld – not unlike Bontecou. Hahn’s creative life has continued through his design of Japanese tea ceremony teaspoons, of which his is one of the very few non-Japanese masters, and in the form of highly personal collages, which he has yet to exhibit. This exhibition at Corbett vs. Dempsey will bring together Walter Hahn’s Chicago-era paintings and drawings for the first time since the 1950s. Among the works exhibited will be sketches of H. C. Westermann, who was a model in life-drawing classes in the late ’40s, and an astonishing group of pieces drawn and painted directly onto the pages of a Swedish book on massage. Hahn’s important canvases on display will include AQUARIUM and SATAN, as well as MEDUSA II, WINGED SNAKES and GOLDEN BOUGH from the prix-de-Rome years.

Augmenting Walter Hahn’s paintings and drawings will be work by two other Chicagoans, both of whom were also deeply influenced by Klee. FRANK VAVRUSKA was active nearly a decade before Hahn, graduating from SAIC in the early ’40s. His paintings vascillate between the delicate and cubistic and the crude and visceral; his highly textured late ’40s abstractions could qualify him as an American COBRA artist. A few years Hahn’s junior, FRANK PETERSON was a beloved figure in the ’50s Chicago artworld, his sweet figure paintings unabashedly Klee-esque in their childlike linearity and chromatic sophistication.