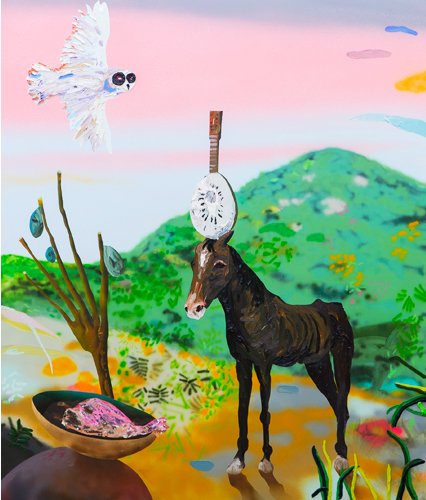 In the North Gallery, CvsD presents Miracle Fruit, an exhibition of new work by Omar Velázquez.  A series of luscious paintings explore the deceptively bright place where tropical surrealism intersects with personal and colonial history, taking as one of its guiding icons the cuatro, a native Puerto Rican stringed instrument – not unlike a mandolin – whose manifold iterations, in form and sound, recall the island's complex legacies.  Shards of tourism, militarism, and industrialism, Spanish and African cultural influences, and pan-Caribbean aesthetics engage the history of the lute as cumulative chronicle of Puerto Rico.  As a dimensional ground for his canvases, Velázquez fabricated a cuatro out of the shell of a higüera fruit, one of its seeds serving as the volume knob.  Indeed, the fruit itself turns out to be the ur-theme of the show, from its life in the soil, with sensuous manifestations in hue and curve, to its status in traditional, modern, and postmodern culture. Opening Reception Friday, June 28, 6 to 8pm Exhibition, June 28 - August 17