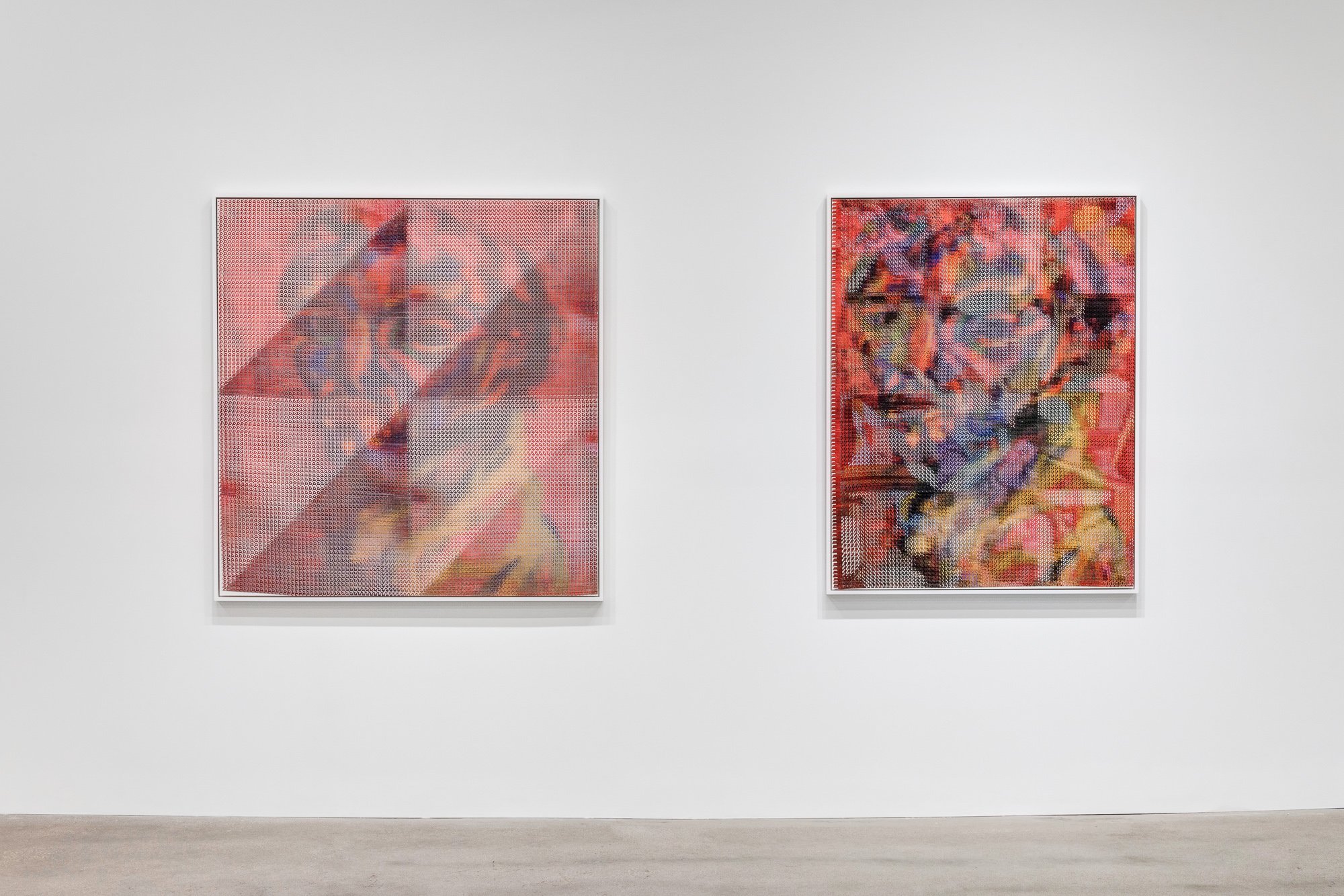 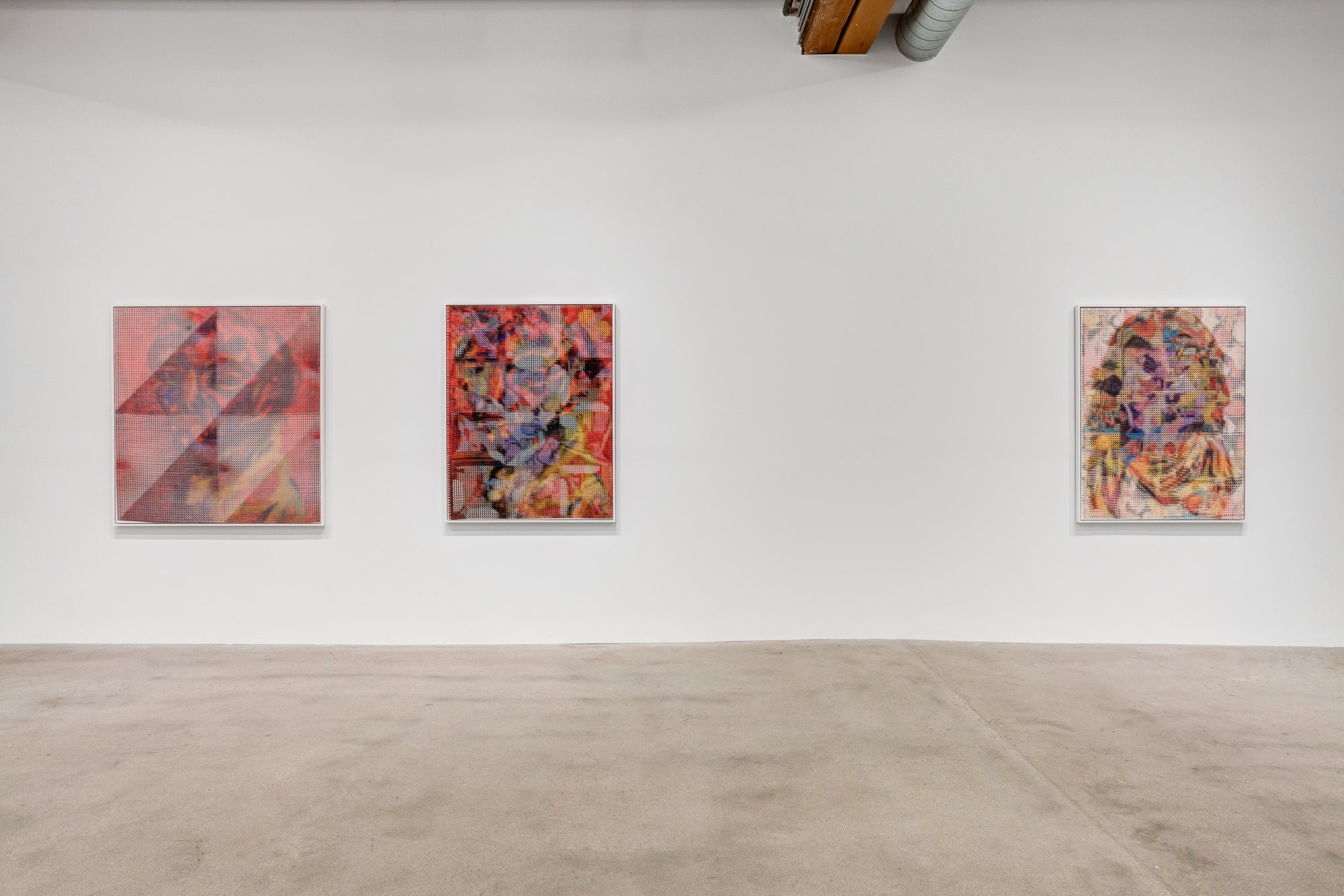 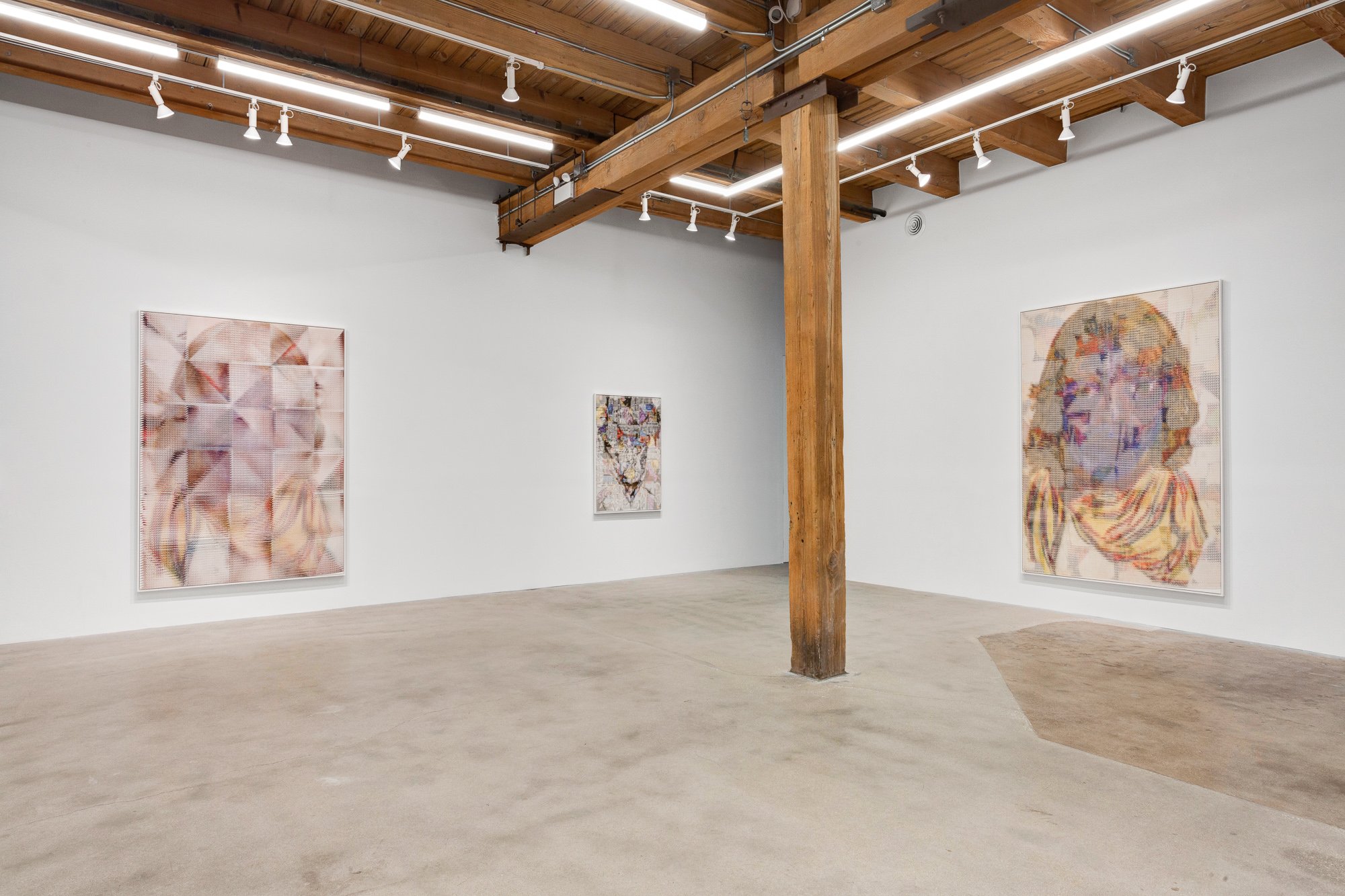 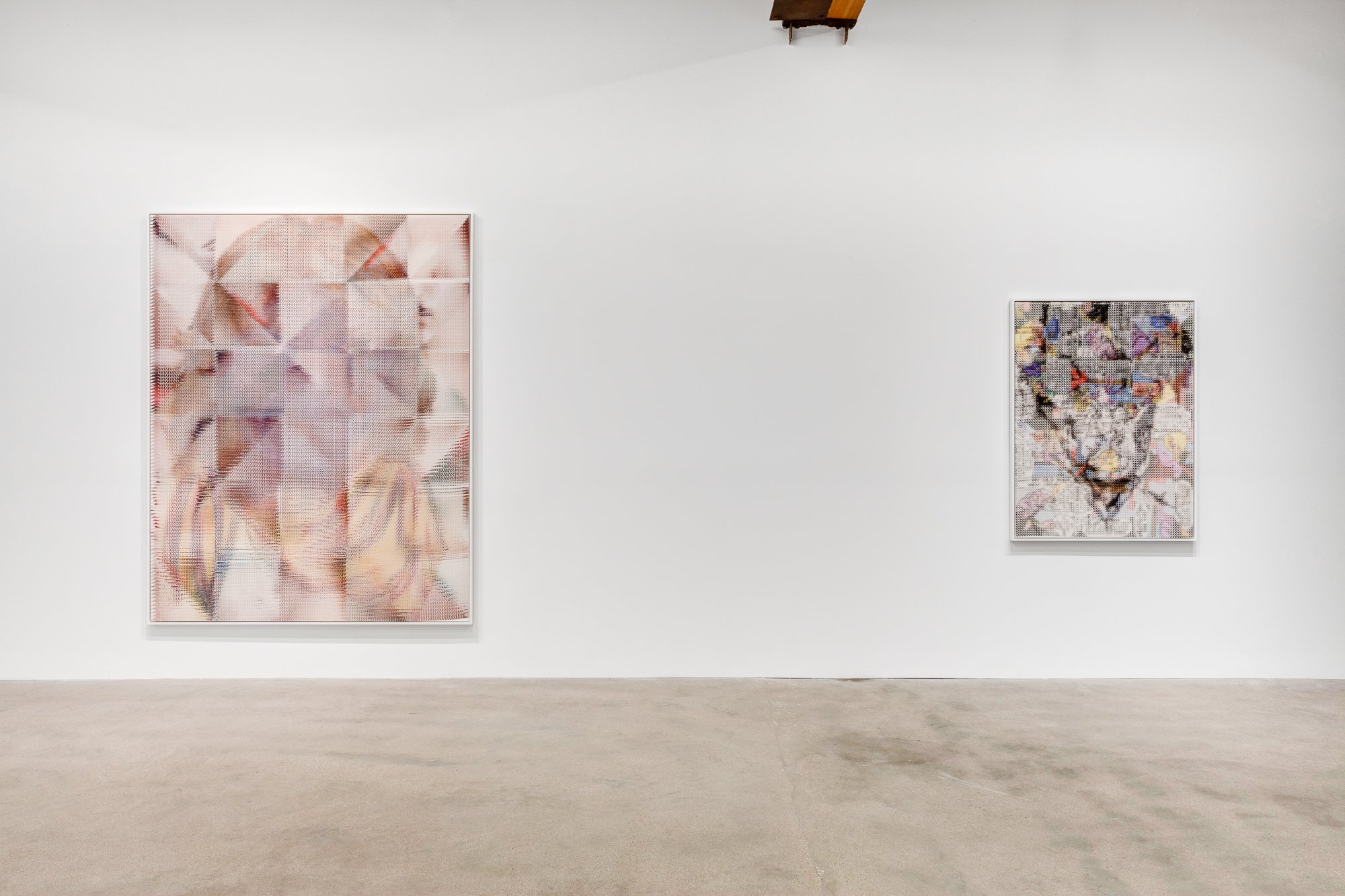 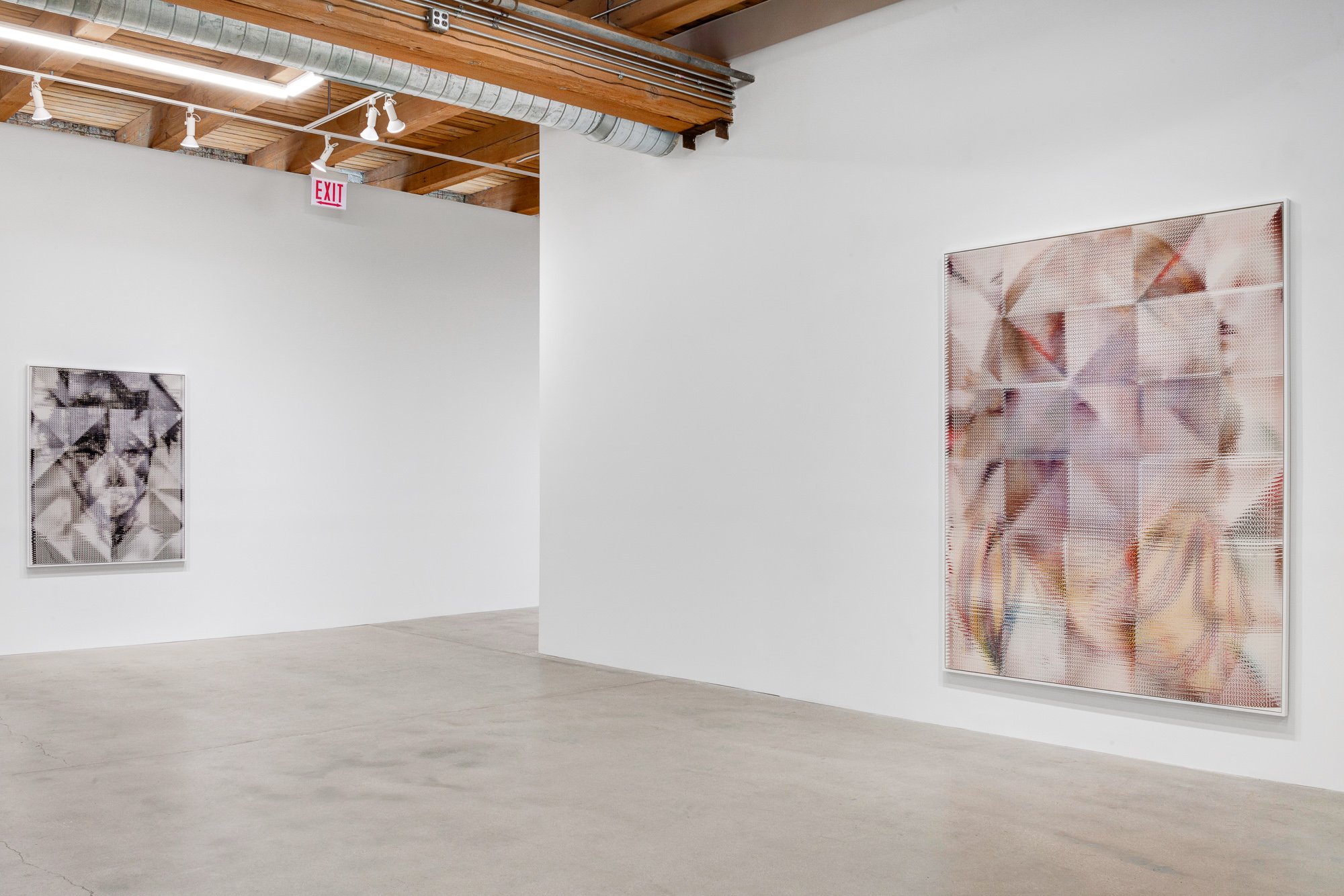 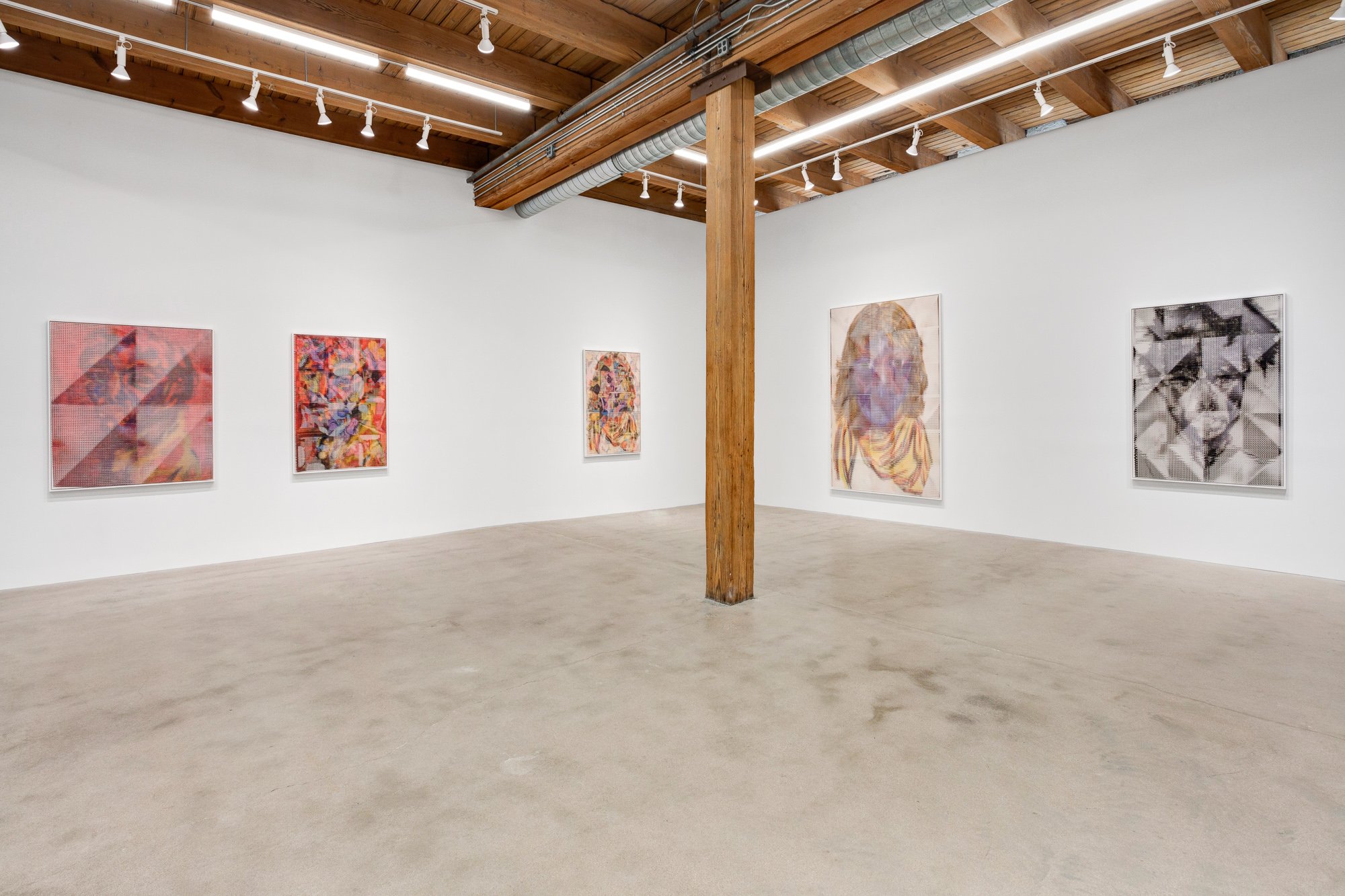 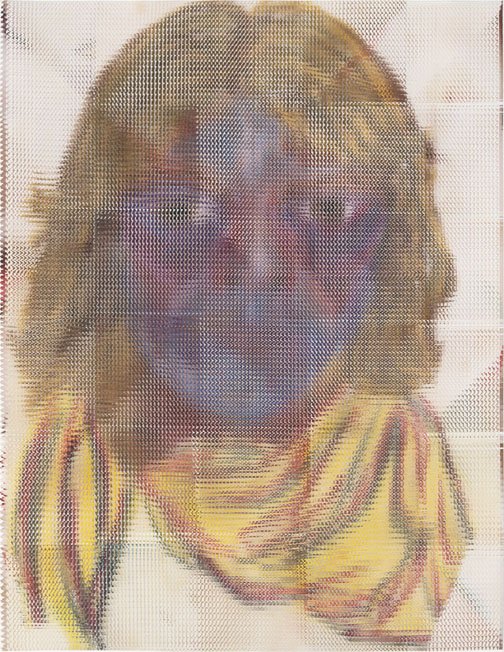 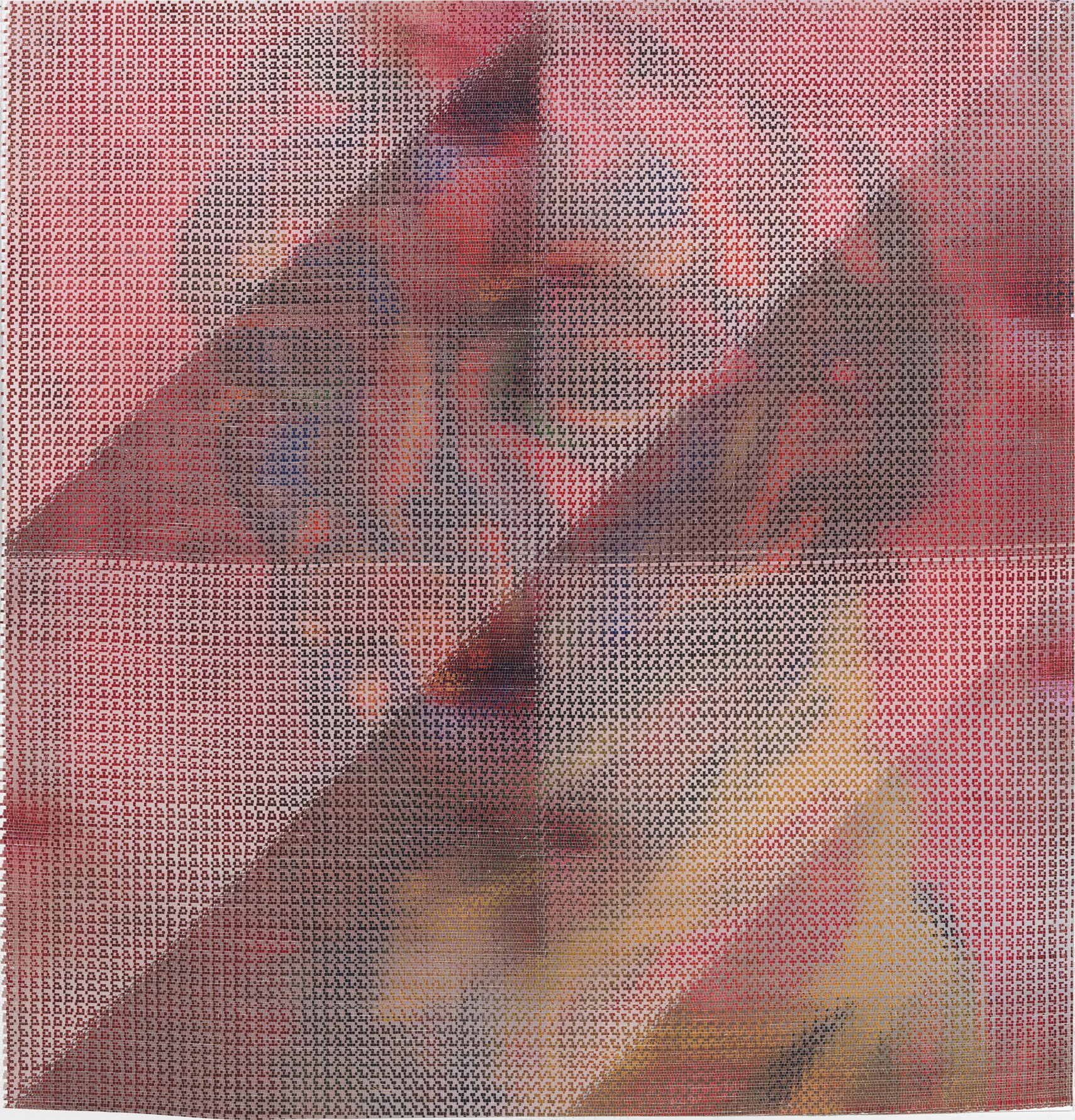 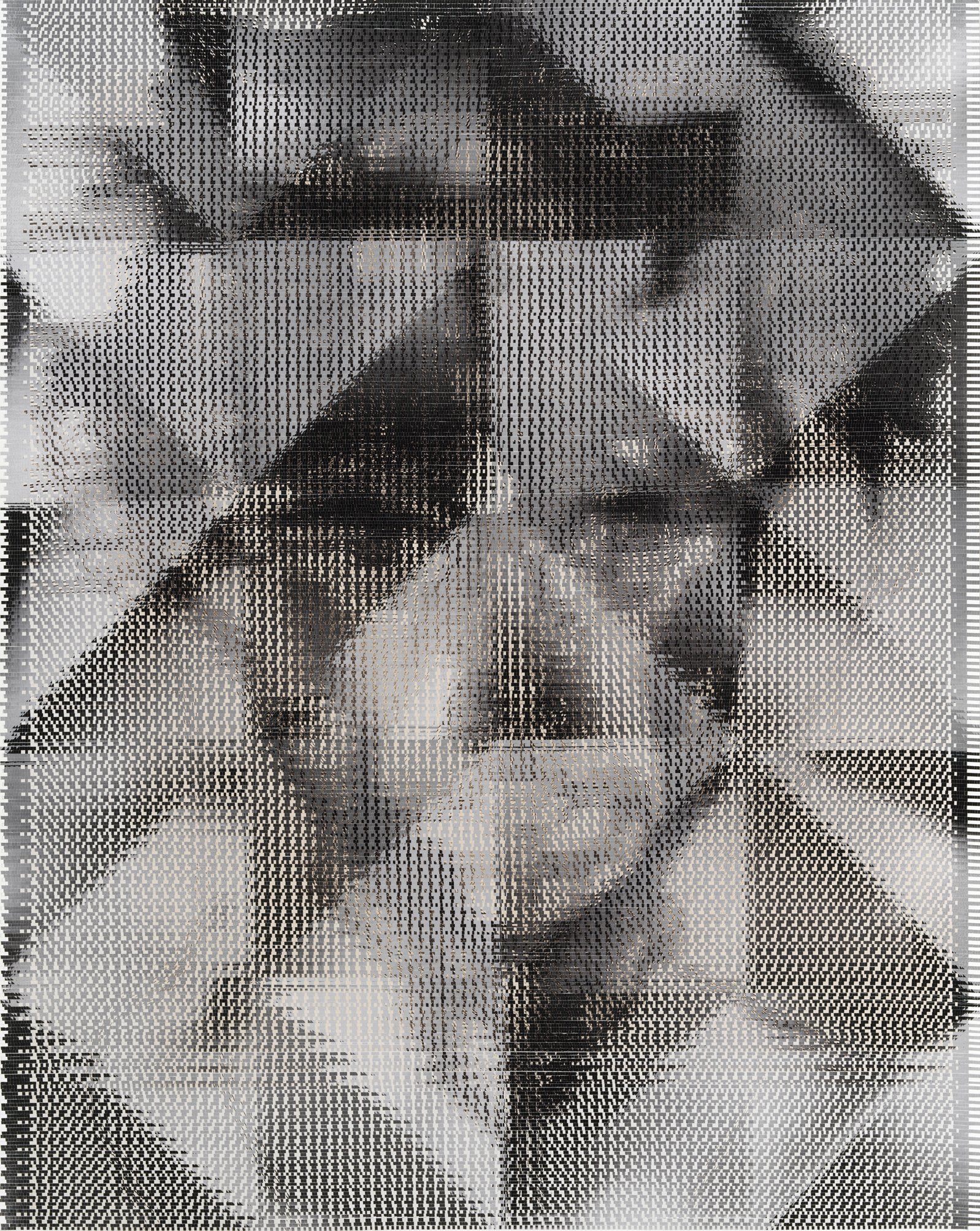 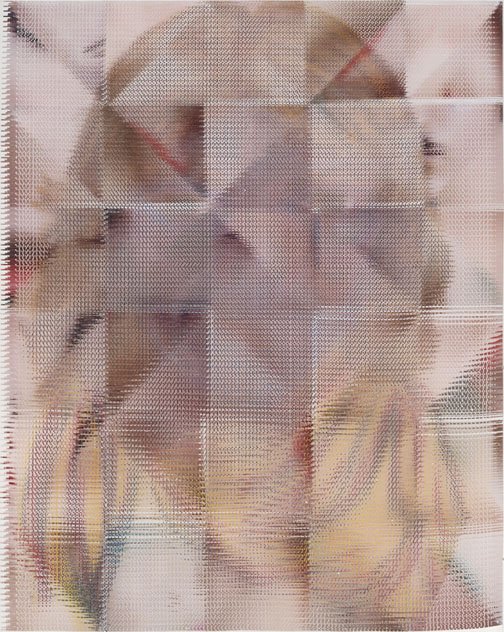 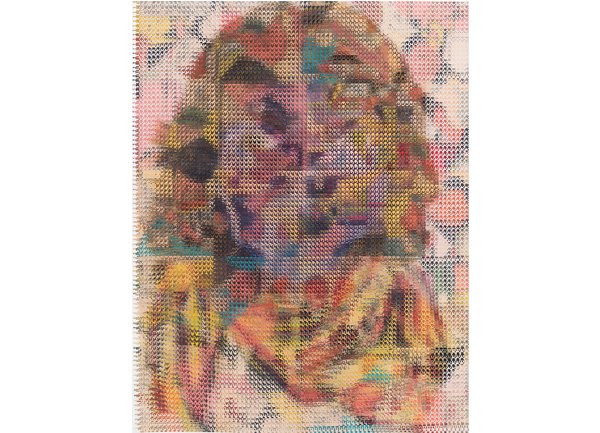 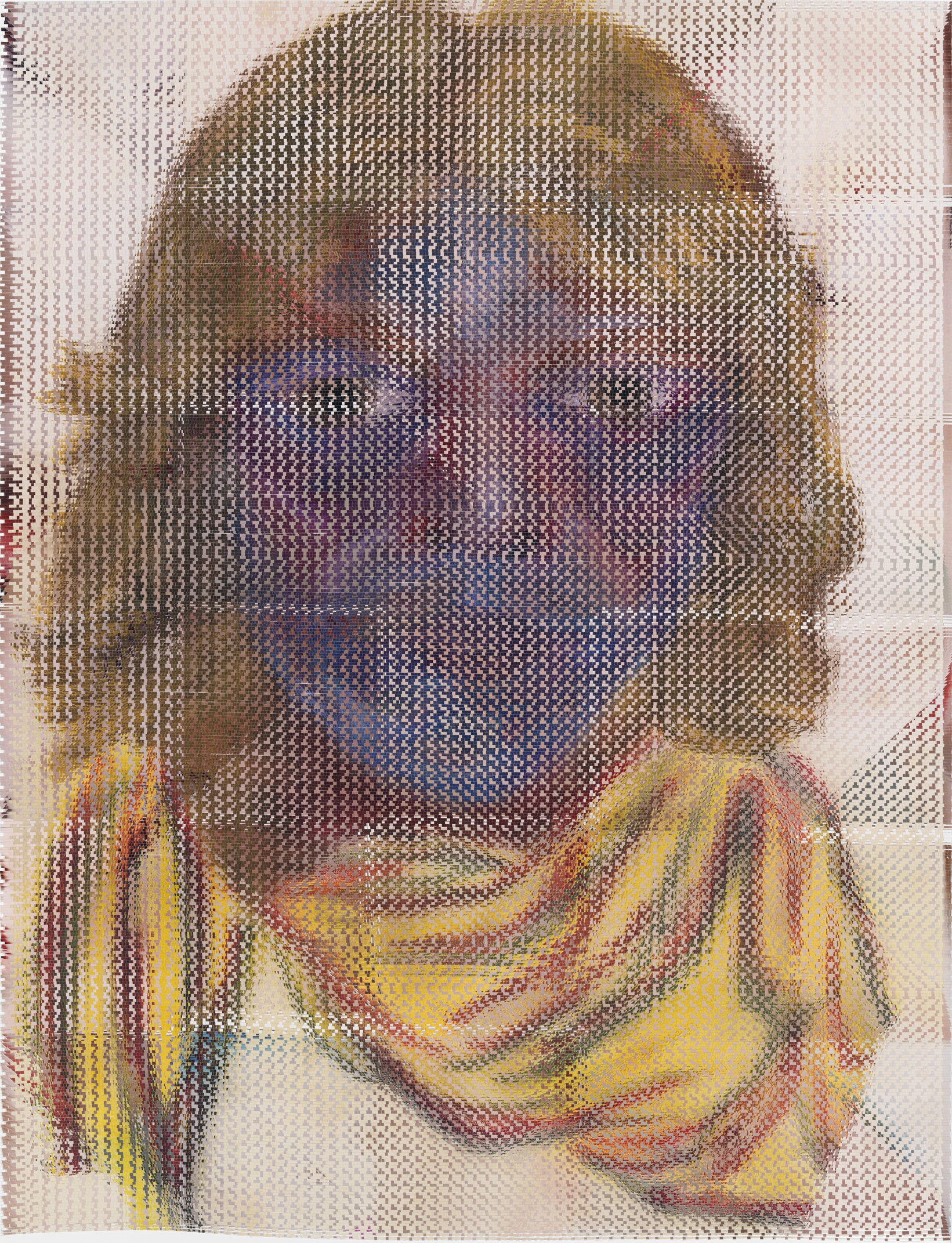 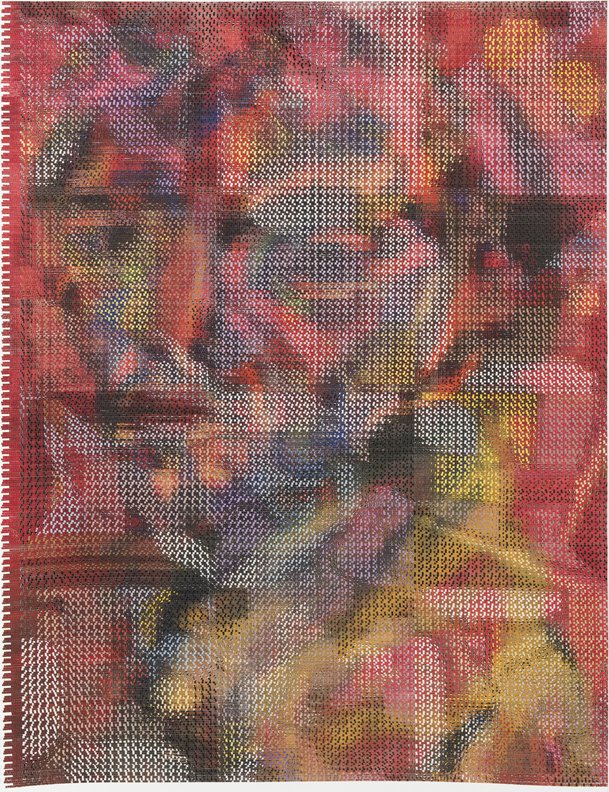 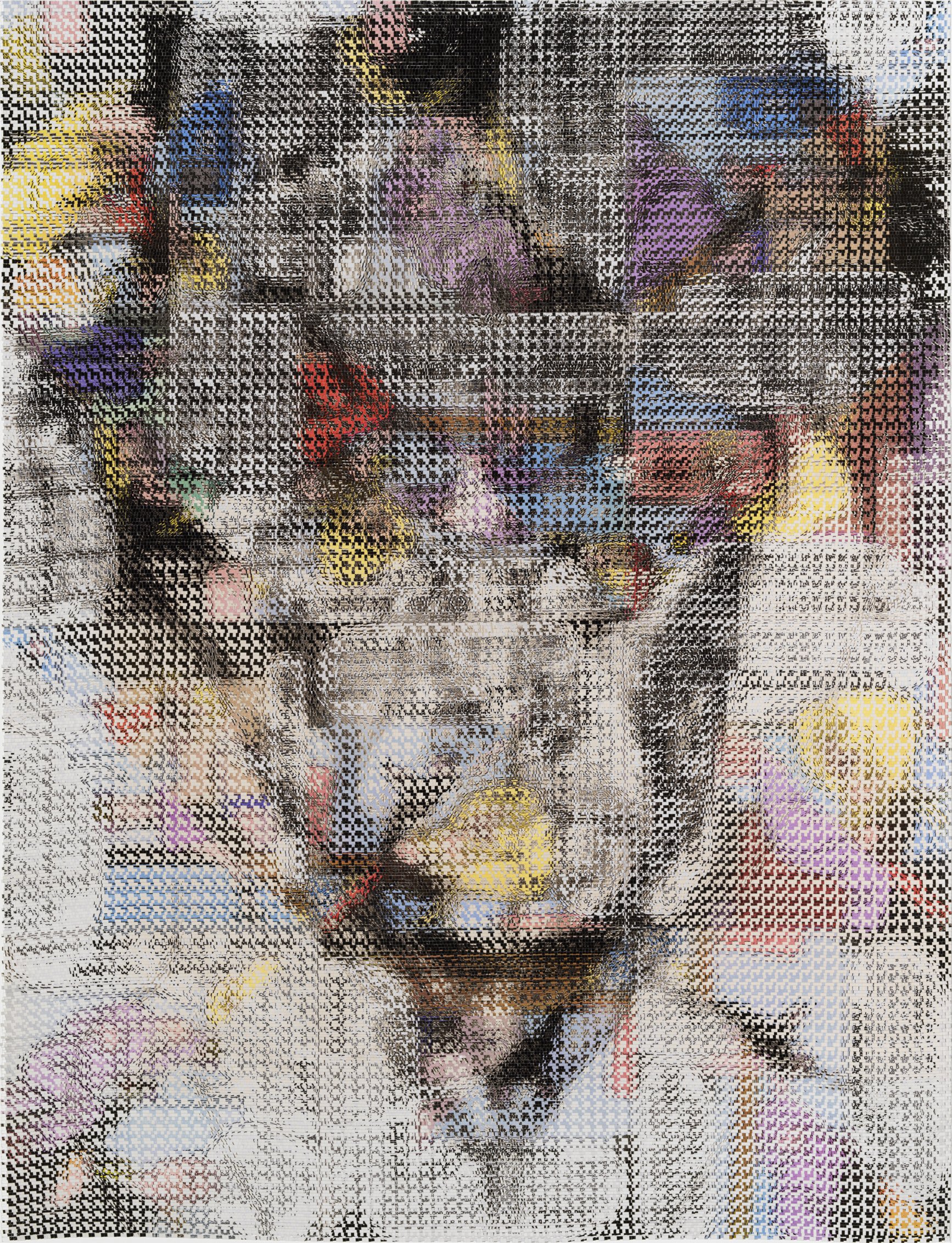 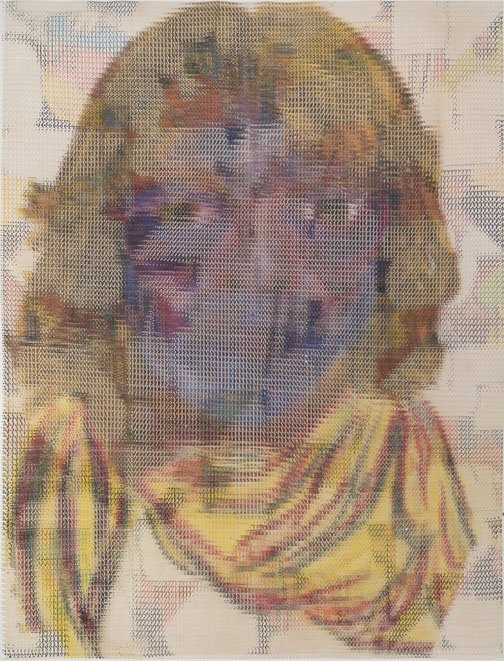 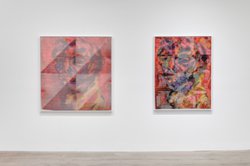 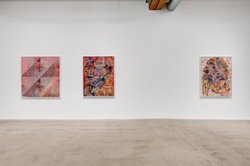 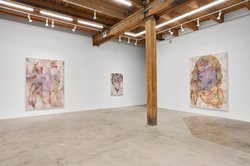 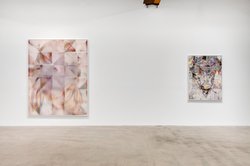 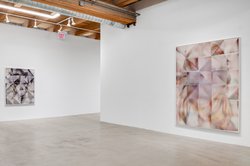 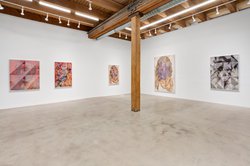 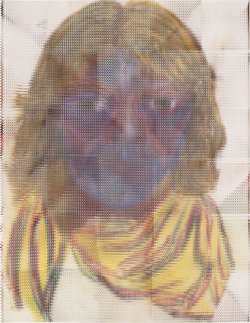 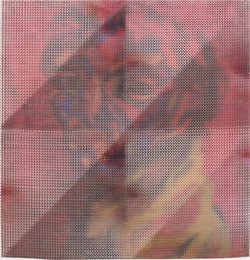 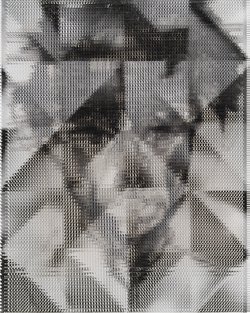 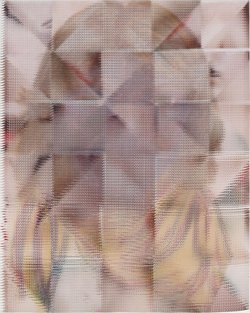 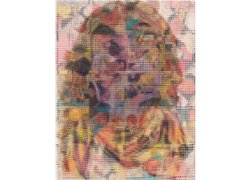 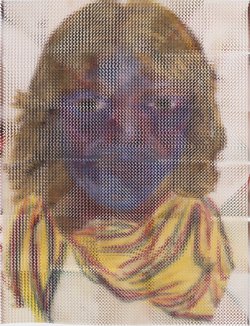 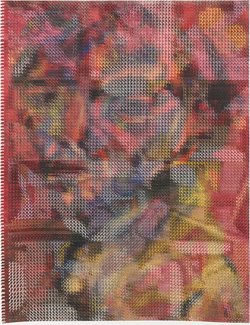 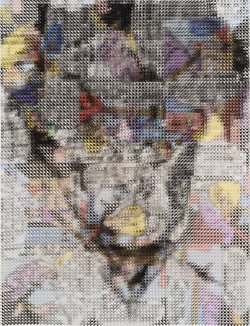 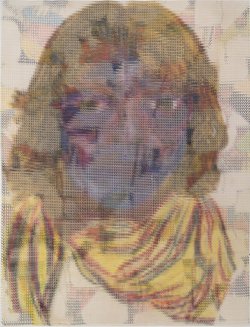 In the South Gallery, Corbett vs. Dempsey is proud to present Shatter, an exhibition of new work by John Sparagana. This is Sparagana’s fourth solo show with the gallery. Over the course of the last fifteen years, John Sparagana has developed a unique process for the investigation and transformation of images. Using a straight razor, he has cut and remixed iconic pages from news magazines, interpolating equally iconic modernist artworks into them or redacting parts of them so that they read more poetically, less didactically. He’s explored the nether regions of the American imaginary by means of deconstructed versions of comics – Dick Tracy and Nancy, to be specific – which he cut and mixed, then remixed again, until they were rendered as whorls of energy and color, stuttering text broken at its core, pixelated images that seem at once digital and handmade. Like a snake eating its tail, Sparagana’s focus has grown increasingly recursive, with one body of work revisiting some aspect – formal, tonal, conceptual, thematic – of its predecessors. Already complex and multidimensional, this web of references began to look deeply inward, turning in on itself, as a sort of material-psychological map, the pathways the work has taken, and other possible avenues of approach. In his latest works, collectively titled “Self Portrait in Dub,” Sparagana turned to a group of four images of himself, self-portraits he composed when he was in his late teens, just before he’d started his life as an artist. These drawings were made when Sparagana spent time with his older sister, and they were rediscovered upon her untimely death. Intense and rough-hewn, the images themselves have a raw power – direct address, affected scarf, seventies hair – that reflects the earnestness of youth. Sparagana unflinchingly dissects and reassembles these images, cutting and intermixing them with one another or with other recent images from his oeuvre. The effect is different in each piece, sometimes brutal and mocking, sometimes gentle and affectionate, sometimes abstracted into a kind of faceless oblivion – self-portraiture as self-destruction. Or self-construction. Colors carry over from the comics. Shapes carry over from a recent group of paintings. The persistent diagonal magnifies the intensity of young John’s visage, creating a sort of psychic vanishing point. In conjunction with Shatter, CvsD has published John Sparagana, a deluxe, 112-page hardbound catalog. Along with the complete “Self Portrait in Dub” series, it reproduces the four overlapping bodies of work that led up to it, from “Breather,” 2016’s paintings, through “Nancy Variations,” “Bodybuilder,” and “Industry White in Dub.” Writer, musician, and composer David Grubbs contributes an essay tying together all these strands, offering a meditation on the effect of Sparagana’s process, and concluding that the newest works constitute “self-portrait as crescendo.” In an interview with the artist, curators Fredi Fischli and Niels Olsen invite Sparagana to contextualize his work in relation to the readymade and modernist collage – both in terms of similarities and differences – suggesting that his works “cure” images, appropriating and ameliorating them.