Gina Litherland The Murmur of Pearls 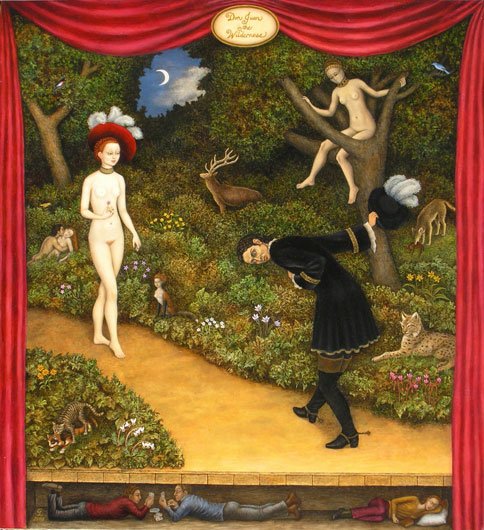 This exhibition features 15 glorious new paintings and takes its title from Arthur Rimbaud, whose writings – along with those of Charles Baudelaire – constitute important points of reference for Litherland. The newest body of work includes several of Litherland’s most ambitious and subtle pieces, some of them extending her fascination with circuses (“old, rural, itinerant circuses, like in Fellini’s La Strada”) and exploring a recent love of opera (“Don Giovanni, which struck me from start to finish as a magnificent nightmare, beginning with violence, sliding into comedy, with multiple dialogues overlapping each other, revealing the inner contradictory workings of each character, ending with the hero being dragged into hell!”). All the paintings are oil on masonite, exquisitely painted and often minutely detailed. A group of five small pieces are quicker and looser, with beautifully painterly backgrounds and solitary figures. Gina Litherland was born in Gary, Indiana, and is now based in southeastern Wisconsin, outside of Milwaukee. From 1979 to 1982 she participated in weekly experimental multi-media performances at the Emergency Theatre in Chicago, where she studied painting at the School of the Art Institute. Litherland’s work has been included in the Wisconsin Triennial at the Madison Art Center, and in 2007 she was the subject of a solo exhibition entitled Queens & Vagabonds at the Haggerty Museum, Milwaukee.