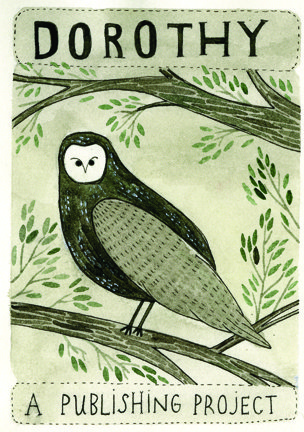 CHICAGO: Dorothy, a publishing project is dedicated to works of fiction or near fiction or about fiction, mostly by women. Edited by Danielle Dutton, Dorothy publishes books that, whether conventional or un-, are uniquely themselves, that do not lean against preconceived ideas of what is wonderful, but brilliantly and purposefully convince us that they are, themselves, wonderful.

Suzanne Scanlon‘s Promising Young Women is a series of fragmentary tales tells the story of Lizzie, a young woman who, in her early twenties, unexpectedly embarks on a journey through psychiatric institutions, a journey that will end up lasting many years. With echoes of Sylvia Plath, and against a cultural backdrop that includes Shakespeare, Woody Allen, and Heathers, Suzanne Scanlon’s first novel is both a deeply moving account of a life of crisis and a brilliantly original work of art.

Suzanne Scanlon’s writing has appeared in The Iowa Review, The American Scholar, DIAGRAM, and many other places. She has worked as an actress in New York and, more recently, in Chicago, where she now lives.

In Azareen Van der Vliet Oloomi‘s Fra Keeler a man purchases a house, the house of Fra Keeler, moves in, and begins investigating the circumstances of the latter’s death. Yet the investigation quickly turns inward, and the reality it seeks to unravel seems only to grow more strange, as the narrator pursues not leads but lines of thought, most often to hideous conclusions.

Azareen Van der Vliet Oloomi is an Iranian-American writer of fiction and non-fiction. She received her MFA in Literary Arts from Brown University, and is a recipient of a Fulbright Grant to Catalonia, Spain. She is co-author of the Words Without Borders dispatch series ArtistsTalk: Israel/Palestine and is at work on a second project entitled The Catalan Literary Landscape, an exploration of notions of journey and the intersections between landscape and literature. She currently teaches in the MFA at Notre Dame University and lives in Indiana with her husband.