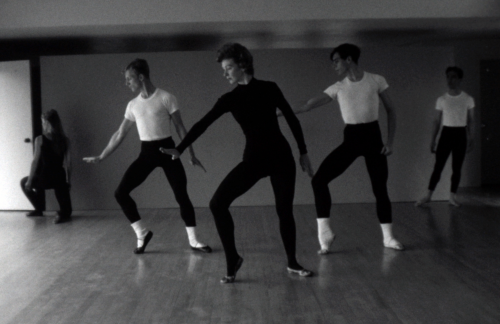 Corbett vs. Dempsey presents… Sequesterfest (Vol. 4)
The Reflection in the Puddle is Mine
Sunday, June 28th, 2020, 7:00pm (Central Daylight Time)

As part of Experimental Sound Studio’s ongoing Quarantine Concerts, Corbett vs. Dempsey is pleased to present Sequesterfest 4, an hour-long film program featuring a selection of treasures from the Chicago Film Archives (CFA) collection. Chosen by archivist Michelle Puetz and Jim Dempsey, the films and videos screened provide rare and fascinating glimpses into life in Chicago, from the 1930s to the present day. A constant element throughout the program is the motif of dance, in more or less abstract forms – from dancing atoms to bodies in motion, and from the geometric to the lyrical. In 2014, CFA commissioned guitarist Jeff Parker to score films featuring Ruth Page and Sybil Shearer, two of which are presented here. The program takes its title from a 1961 film by dancer and choreographer Shearer and filmmaker Helen Morrison and documents Shearer’s dance company in a performance that moves from the mundane world of work to an abstract, spiritual level. All donations go directly to CFA.

These films convey a particular poetry and grit of a Midwestern city in mid-century. The movement and majesty of this mash-up combines historical source material, some with contemporary jazz scores, with an eye squarely on the place where hard work meets artistic transcendence.
– Jim Dempsey

Union Pier 1942: Film Experiments (excerpt) (Morton & Millie Goldsholl, 1942, b/w, silent, 5 minutes)
An exploration of objects and bodies in motion by the duo behind Goldsholl Design and Film Associates, one of Chicago’s leading graphic design studios from the 1950s through the 1970s.

Variations on Euclid (Ruth Page, 1938, original score by Jeff Parker, b/w, sound 4 minutes)
Choreographed by dancer Ruth Page, Variations on Euclid is part of a larger collaboration with artist Isamu Noguchi, who designed the “sac dress” at the center of the ballet and created a sculpture based on Ruth Page in this dress titled Miss Expanding Universe (1932).

Untitled Rehearsal (Ruth Page, circa 1930, original score by Jeff Parker, b/w, sound 2 minutes)
While on tour in Southeast Asia in 1928-29, Ruth Page filmed numerous dances that would later influence her choreography. In this footage, we see Page experimenting with movements based on traditional Balinese dances.

The Reflection in the Puddle is Mine (Helen Morrison & Sybil Shearer, 1961, b/w, sound, 5 minutes)
A document of Sybil Shearer’s company performing a dance described as one in which “people with mundane jobs are caught up in something bigger than themselves and drawn to an abstract, spiritual power.”