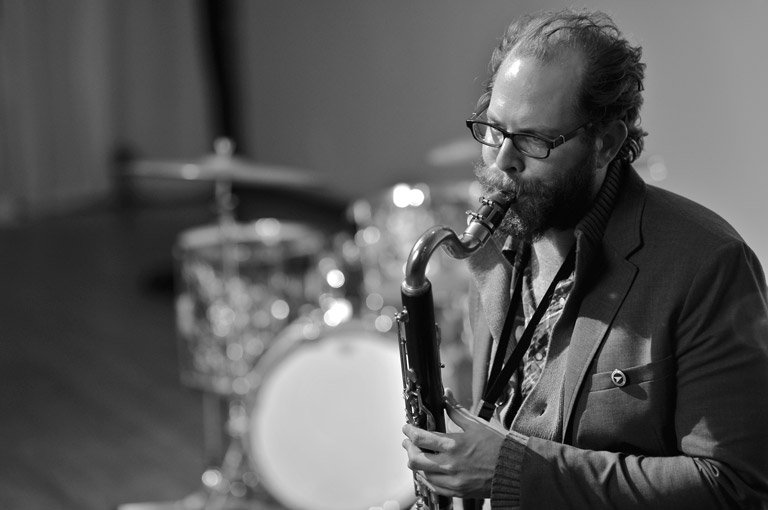 In conjunction with the current show, Other Planes of There, Corbett vs. Dempsey is pleased to present a solo concert by Jason Stein.  An important figure on the American improvised music scene, Stein resides in Chicago, where he works with all the major players.  His 2011 Delmark CD The Story This Time, with saxophonist Keefe Jackson, bassist Joshua Abrams, and drummer Frank Rosaly, showed his inventive skills in a post-bop setting, while the 2013 duets with drummer Tim Daisy on Bascule offered evidence of what he can do in a more intimate context.  Stein has released a powerful and absorbing disc of solo bass clarinet, In Exchange for a Process (Leo, 2009), which promises to be closest to what we’ll hear in this outing.

Jason Stein was born in 1976 and is originally from Long Island, New York. He is one of the few musicians working today to focus exclusively on the bass clarinet as a jazz and improvisational instrument. He studied at Bennington College with Charles Gayle and Milford Graves, and at the University of Michigan with Donald Walden and Ed Sarath. In 2005, Stein relocated to Chicago and has since performed and recorded with Russ Johnson, Rob Mazurek, Josh Berman, Keefe Jackson, Ken Vandermark, Kyle Bruckmann, James Falzone, Tim Daisy, Joshua Abrams, Mike Pride, Frank Rosaly, Mike Reed, Jason Roebke and many others and has recorded for such labels as Leo, Delmark, Atavistic, 482 Music and Clean Feed.

free and open to the public