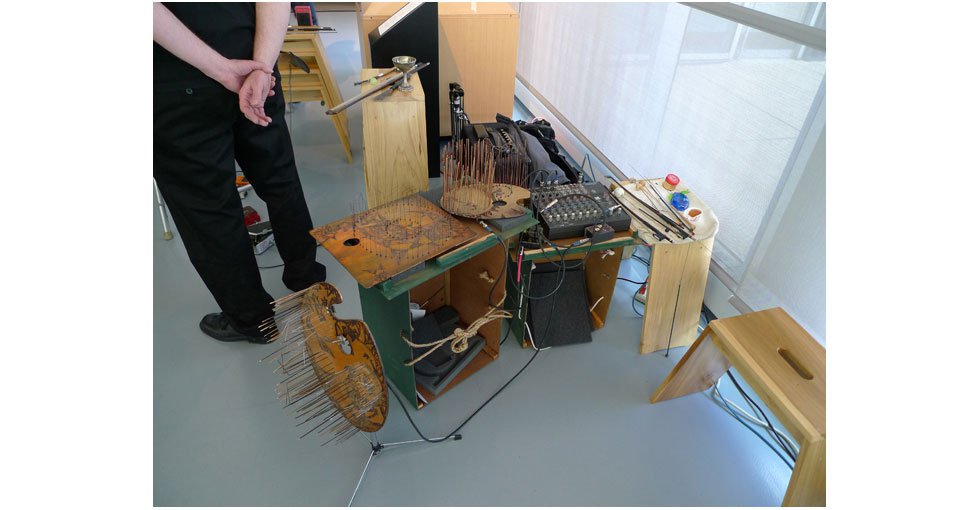 CHICAGO: Corbett vs. Dempsey is pleased to host an event celebrating the release of new music by Hal Rammel. As part of this afternoon event, Rammel will perform duo improvisations with bassist Jason Roebke.

Midwest Disquiet is Rammel’s first solo recording on the amplified palette since the release of the Crouton 10″ “Like Water Tightly Wound” early in 2007 and is released in a numbered limited edition of 99. As a visual artist, composer, and performer Rammel has been designing and building unusual one-of-a-kind musical instruments since the mid 1970s. The amplified palette – first constructed in 1991 – is simply an artist’s palette with various wood and metal rods attached to be played with mallets or bows specifically designed for the instrument. Amplified with a contact microphone it generates sounds which on first hearing may be likened to a mbira (‘thumb piano’) or to a prepared piano or, when played with a bow, to a cello or viola.

The interocyter, featured on “Song of the Interocyter,” originated in the chance meeting of a billiard ball rack and the gracefully carved leg of a discarded footstool on Rammel’s workbench in 1996. It generates sounds from the deeply resonant to the delicately ringing when played with a unique set of mallets and bows specifically designed for the instruments three-corner assemblage of watch springs and music box parts. The two sides of this 45 rpm record – Rammel’s first recording on the instrument – explore its abstract collision of broken melodies and sonorous crashes. “Song of the Interocyter” is released as the fourth 7″ single in the Penumbra Music catalog and is available in a number limited edition of 99.