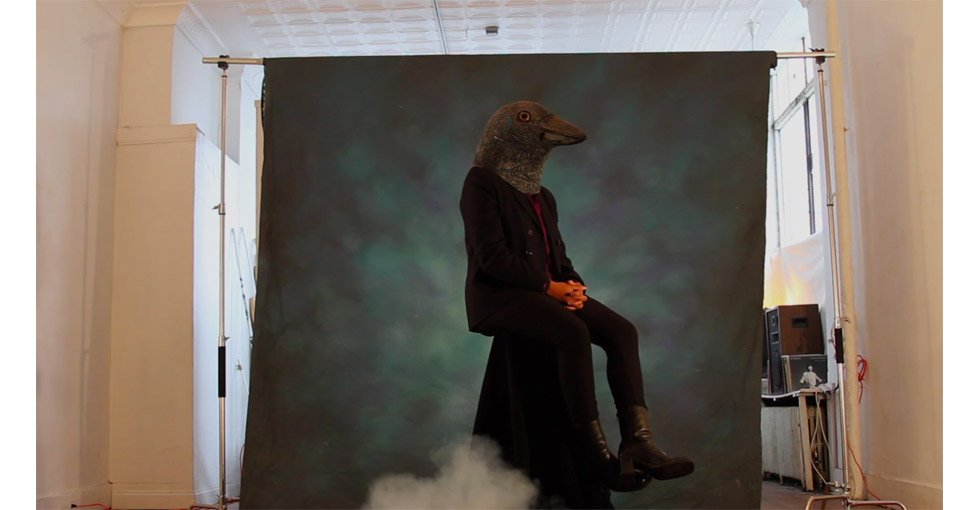 In conjunction with the exhibition After Today, Gallery 400 presents the film Crow Requiem (2015) by artist Cauleen Smith. This work explores the figure of the crow through the histories of Syracuse and Auburn, New York, both of which were key stations on the Underground Railroad as well as innovators in early cinematic and 3D optical technologies. Crow Requiem connects this history to recent and ongoing violence against people of color at the hands of the state. Following the screening, Cauleen Smith will be in conversation with filmmaker Ian Curry and artist Krista Franklin.

Crows are well known for their mythological reputation as tricksters and harbingers of death, but less for the reality that they are creatures of remarkable intelligence who lead complex social lives. Cauleen Smith’s fascination with these misunderstood animals began when she noticed a massive flock of crows roosting outside her bedroom window during her artist residency at Light Work in Syracuse. She learned that the native population of crows circulates between Syracuse and nearby Auburn, NY; and that this migration is partly in response to harassment and, at times, state-sanctioned violence at the hands of a human population who view them as a nuisance. Crow Requiem was shot on location in Central New York, and features selections from Onondaga Historical Association’s extensive archive of 19th century stereoscopic images.

Cauleen Smith’s interdisciplinary practice merges improvisational music, speculative fiction, African-American history, and processional forms to create temporal and spatial ruptures that make room for new affinities, empathies, and consciousnesses. Smith’s films, objects, and installations have been featured in group exhibitions at the Studio Museum of Harlem, NY; Houston Contemporary Art Museum, TX; the Blanton Museum of Art, Austin, TX; San Diego Museum of Contemporary Art, CA; D21 Leipzig, Germany; Yerba Buena Center for Arts, CA; and the New Museum, NY. She has had solo shows at The Kitchen in New York City, MCA Chicago and Threewalls in Chicago; and Women & Their Work in Austin, TX. Her work has also been featured in high profile festivals such as Sundance and screened twice by demand at the prestigious Robert Flaherty Film Seminar Exhibition. In 1999, she was selected as one of Ten Directors to Watch by Variety magazine. Smith is the recipient of several grants and awards including a Creative Capital grant, the Rockefeller Media Arts Award, Chicago 3Arts Grant, and the Foundation for Contemporary Arts. Smith earned an MFA from the University of California, Los Angeles. She currently lives in Chicago while teaching at the Vermont College of Fine Art low-residency MFA program.

Ian Curry is a filmmaker whose work celebrates the sensuality, magic, and history of the physical medium of 16-millimeter film. His work focuses on manipulating film through experimental processes and testing its limits by way of designed apparatuses for presentation. He often uses hand processing, optical printing, contact printing, and in-camera editing to reveal a passing moment’s brilliance or a presented moment’s faltering truth. Curry has screened his films at the Constellation, DOC Films, Gallery 400, MCA Chicago, Mass Art Film Society, Millennium Film Workshop, MUFF, and the Nightingale Cinema. He teaches 16 millimeter filmmaking at Chicago Filmmakers and has been a Visiting Programmer at The Nightingale Cinema since early 2014 where he curated Playing Her Part: Films and Videos by Cauleen Smith. Curry earned a BFA at the Massachusetts College of Art and Design in Boston and an MFA at the University of Illinois at Chicago.

Krista Franklin is an interdisciplinary Chicago based artist that uses both literary and visual art to respond to popular culture and public history of the black community in the US and the larger African Diaspora. Franklin creates mixed media collages with acrylic, watercolor, handmade paper and found objects such as old letters and vintage magazine advertisements to convey a “fantastic,” imaginary dream world to inspire, challenge and educate her audiences. Her poetry employs metaphorical language and hip-hop to create a distinct sound and message. Franklin’s work has been featured in a number of galleries and literary journals such as Coon Bidness, Copper Nickel, RATTLE, and in the anthologies Encyclopedia Vol. II. She is also a Cave Canem fellow, and co-founder of the 2nd Sun Salon and Tres Colony. Further Franklin taught for Young Chicago Authors, the Neighborhood Writing Alliance, and ETA Creative Arts.