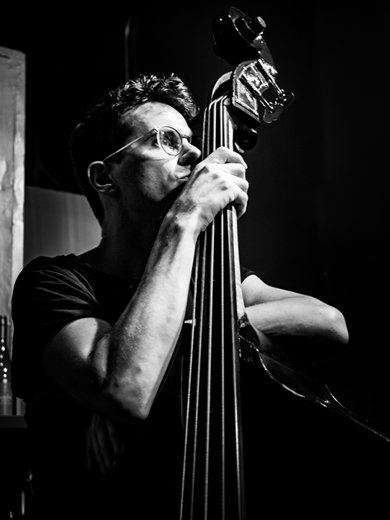 One of the most resourceful composers and bandleaders in contemporary improvised music, double-bassist Torbjörn Zetterberg has led several killer ensembles in the last two decades, including the Torbjörn Zetterberg Hot Five and Torbjörn Zetterberg and the Big Question (a sextet whose CD, Live, was just issued by Corbett vs. Dempsey).  In addition to his work as a writer and arranger, Zetterberg is an incredibly powerful instrumentalist and improvisor.  He has a deep contemplative streak, evidenced by periodic hiatuses from music, during which he spends time at a Buddhist temple.  With muscularity and a deep, woody tone, the Swede’s playing has evoked comparisons to Charles Mingus; solo and in small group improvising settings, Zetterberg’s an intrepid explorer – chops galore, always at the service of the music.  Please join us for a rare opportunity to hear him perform solo bass improvisations.  With support from The Swedish Arts Grants Committee, Konstnärsnämnden.