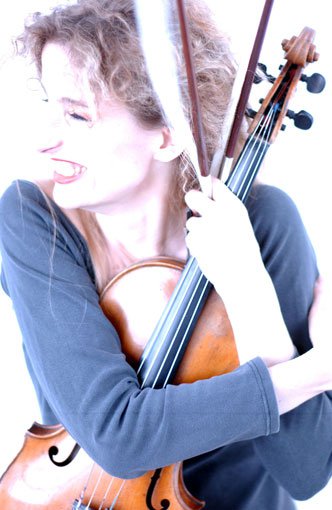 CHICAGO: A highly regarded performer of new composed music and a composer herself, Charlotte Hug is also a wonderful improvisor, and she will present a program ofsolo music for viola. Hug is a member of the London Improvisors Orchestra and has worked extensively with such musicians as John Butcher, John Edwards, Phil Minton, Maggie Nicols, Evan Parker, and Phil Wachsmann. Hug often seeks out unusual venues for her performances, places that lend surprising acoustic, visual or emotional accents to her playing. She has appeared in the icy caverns of the Rhône Glacier in the Upper Valais in Switzerland as well as in an acoustically insulated S&M torture chamber in Zurich’s red light district. The labyrinthine subterranean passageways of the “House of Detention,” a 250-year-old former dungeon in the London neighbourhood of Farringdon, have also played host to her productions. In the glass wood-and-brick environment of CvsD even her most fleeting and delicate sounds should be impeccably audible.

Bill Meyer’s preview of the CvsD performance in the Chicago Reader:

Neither the collapse of the world economy nor the increasing unpleasantness of air travel has kept Swiss violist Charlotte Hug from cultivating partnerships with improvisers in the Americas. The new LIFT (Edgetone), her first proper album in six years, is a wild collaboration with Mexican artist and inventor Guillermo Galindo (aka gal*in_dog) that juxtaposes prelingual vocalizing, mechanical clatter, and eerie, groaning strings. Tonight’s concert is a solo performance entitled Anderwelten, for which Hug will respond to a collection of abstract graphic scores she’s hung about the room; she draws these ‘Son-Icons’ while listening to recordings of her own earlier improvisations.