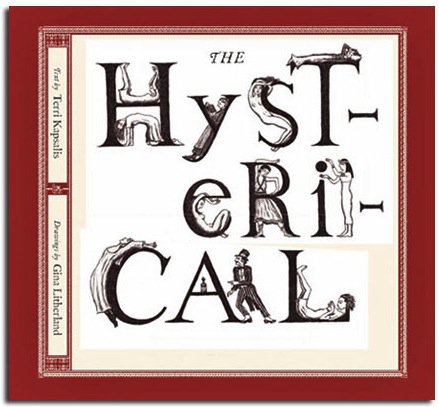 CHICAGO: Come celebrate the release of The Hysterical Alphabet (WhiteWalls Press) by Terri Kapsalis and Gina Litherland. Join us for a festive reception featuring an exhibition of the Litherland drawings reproduced in the book and live music by Janet Beveridge Bean (Freakwater/Eleventh Dream Day) with the Horse’s Ha.

The history of hysteria—four-thousand years of malady and myth manifested in a culture of traveling uteruses, the shrieking ladies of Grecian drama, and countless allusions to Freud consoling Dora on his upholstered settee—is the object of condensation in Terri Kapsalis and Gina Litherland’s pithy & playful abecedary The Hysterical Alphabet. Drawn from medical writings and images ranging from ancient Egypt to the present, each letter of this uproarious, articulate, and critically incisive collection introduces an episode direct from the annals of medical lore. From the poetic origins of the womb to the alliterative medicating of menstruation (with stops for diagnosis and cake along the way), The Hysterical Alphabet tracks centuries of female malady, heartily disproving the theory that time heals all wombs.